top
Home•Investigation •Nun stays in prison, while other Sisters are attacked in Tamil Nadu 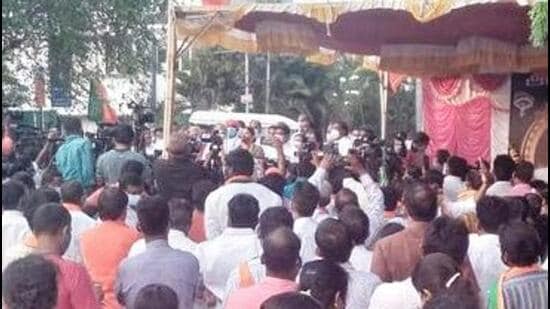 Nun stays in prison, while other Sisters are attacked in Tamil Nadu

The suicide of a girl in a hostel run by the Franciscans of the Immaculate Heart of Mary is being used to fuel accusations of conversion. The case is now in the hands of India’s Central Bureau of Investigation, but according to the local school board no complaints were ever filed against the nuns. Meanwhile, in another district, two nuns were attacked by Hindu radicals. For Archbishop Felix Machado, Hindu nationalists “have cleverly constructed a narrative and found ways to carry it out” against Christians.

Chennai (AsiaNews) – Sr Sahaya Mary, a 62-year-old member of the Franciscan Sisters of the Immaculate Heart of Mary, will remain in prison. She was arrested in connection with the suicide on 19 January of a girl at a hostel run by the Sisters in Michaelpatti, a village in Thanjavur district (Diocese of Kumbakonam).

Hindu nationalists have been exploiting the tragedy, which stems from the girl’s troubled relationship with her family, in order to accuse the nuns of pressuring the girl to convert.

They rely on a video that went viral in which the girl mentions being asked to convert two years ago, which she refused to do.

The nun’s application for bail was turned down by the Madras High Court in Chennai, which referred the case to the Central Bureau of Investigation, India’s federal investigative agency.

The court also asked that the phone with the video, which belongs to the member of a Hindu nationalist group, be taken as evidence.

For its part, the local school board recently issued an official report stating that no complaints of forced conversions were ever made against the Franciscan-run school. In Tamil Nadu, the Sisters of the Immaculate Heart are also known as Pondicherry Blue Sisters.

“For the past 178 years, since the beginning of our congregation, we have remained steadfast in our vision and mission through our witnessing life, selfless heart and humaneness,” said Provincial Superior Sr Firmina Mary, speaking to AsiaNews. “We continue to empower the womenfolk who are under the oppression of male chauvinism.”

“Sister Sahay Maria is still in jail. We are getting overwhelming support from the public, especially from non-Christians,” she explained. “The tragic death of this girl staying in our hostel had nothing to do with the charges of conversion.”

The superior noted that the girl, who comes from a poor family, was marked her mother’s suicide a few years ago over misunderstandings with her husband.

After this she came under strong psychological pressure from her stepmother; for this reason, she was welcomed in the hostel, where Sr Sahaya Mary took care of her as she has done for decades with other girls.

“For the past few months, she was tormented with the thought of going back home after the 12th standard examinations, and face her step-mother,” Sr Firmina Mary explained.

“The girl became panic-stricken and her anxiety troubled her with inconsolable grief and drove her to commit suicide. We are terribly shocked by the death of this student.”

“This panic is at the root of the tragic death, which left us in shock. And now we are saddened to see this affair used to tarnish our reputation and that of our sister.”

For Archbishop Felix Machado, secretary general of the Catholic Bishops’ Conference of India (CBCI), Hindu nationalists “have cleverly constructed a narrative and found ways to carry it out, and do not give people a chance to defend themselves.”

In fact, the climate of hatred thus created is spreading. For instance, “two nuns were harassed by some elements in Tamil Nadu’s Pudukkottai district,” the prelate told AsiaNews.

“They were on their way to help someone, but some 20 to 30 people stopped them, accusing them of trying to convert people to Christianity.”

Ultimately, “They want to eliminate Christianity,” he lamented.

Read the story at Asia News