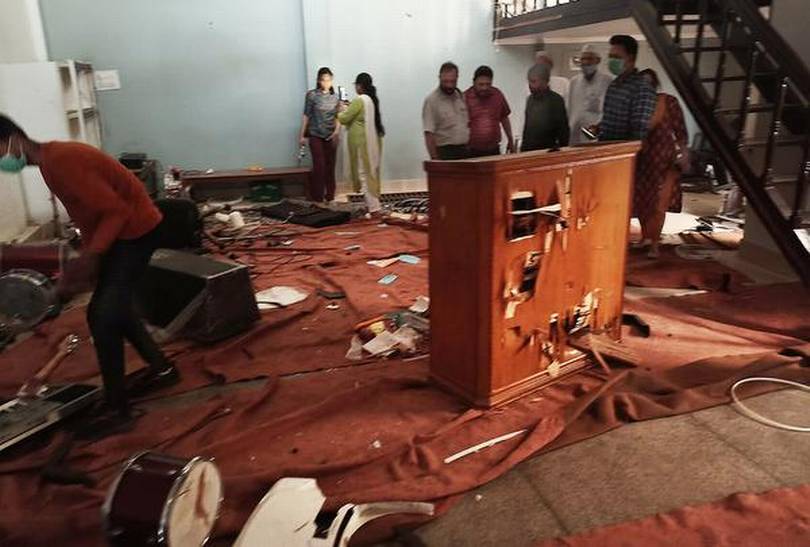 Churches under attack: Uttar Pradesh reports most cases of anti-Christian violence across India

The Following is excerpts from the original article published in FRONTLINE Magazine:

According to data available with the United Christian Forum (UCF) helpline, 305 such incidents have been reported this year in India. Uttar Pradesh fares the worst, with cases reported from cities and towns as diverse as Varanasi, the Prime Minister’s constituency, Prayagraj (Allahabad), Noida, Ayodhya, Rampur, Bahraich and Lakhimpur Kheri. The most recent of these attacks have been in Mau district in Uttar Pradesh and Roorkee in Uttarakhand.

Said the activist John Dayal: “The common factor in Uttar Pradesh is that the anti-conversion law for Muslims includes Christians too. People come to churches wielding lathis, accompanied by a local photographer and videographer and often by the police. They disrupt the prayer service, beat up the pastor, and if it is in a building, they attack the building, desecrate the Bible, etc. As in Roorkee. The police are almost always mute witnesses although in Roorkee they did take action because the local people also acted. Even if the police register a case against the Bajrang Dal or the Hindutva brigade, a case is also filed against the victims, including pastors. The victim is penalised. It is the same template. Be it the pastor or the maulvi, cases are registered against them too though the Bible or the Quran might have been desecrated by the attackers.”

In Roorkee on October 3, more than 200 people allegedly barged into a church, vandalised property and attacked those gathered for Sunday prayers. Only 12 people were present in the church at the time. A 50-year-old man who led the mob held the pastor’s daughter by the shoulder while another man allegedly molested her. Women in the group slapped the girl and snatched her mobile phone.

Rajat Kumar, a helper at the church, suffered serious injuries on his head after being hit with an iron rod. “They dragged me by my neck to the ground floor while raining blows on my face and back. I became unconscious after I was hit with a rod on my head,” he told a team of activists from human rights organisations such as the United Christian Forum, United Against Hate and the Association for Protection of Civil Rights (APCR).

The mob alleged that the church was functioning unlawfully on private property. The pastor dismissed the allegations, pointing out that they were affiliated with the Full Gospel Fellowship of India registered under The Societies Registration Act. He shared the land deal document with the fact-finding team to buttress his claim.

Incidentally, the church reported suspicious activity “at least four times before the mob attack”. Said the pastor’s daughter: “We received hateful anti-Christian threats by unknown men. They accused us of conversion and threatened violence. I had sent an e-mail to the Superintendent of Police, visited the police station and registered a formal complaint on October 2 with the Civil Lines police. They assured us of security but no help came. Even on the day of the attack, we kept calling the police but they came only one hour after the mob had done the damage.”

Incidentally, the police station is less than a kilometre from the church. Before the police arrived, the mob destroyed CCTV cameras, vandalised religious symbols and chanted slogans of ‘Jai Shri Ram’ and ‘Har Har Mahadev’ inside the church premises.

It was worse in Mau, where a Hindutva mob, some of whom claimed to be Bajrang Dal and Hindu Yuva Vahini activists, attacked a regular prayer service on October 10. The attackers allegedly forced the worshippers, including the priest, to accompany them to the police station. An FIR filed by a Radheyshyam accused the worshippers of conversion and violating the COVID-19 protocol.

Elsewhere in Mau on the same day, Bhanu Pratap Singh, the district in charge of the Hindu Jagran Manch, filed a complaint with the police that a pastor had organised a prayer meeting at a private residence in order to convert local people. The police arrested Pastor Abraham Shakeel Ahmad, his wife Pratibha, and Vijendra Rajbhar and Geeta Devi, the couple in whose house the prayer was held. Despite their statements to the contrary, they were booked under the Prohibition of Unlawful Religious Conversion Ordinance, 2020.

In another instance in Mau, on October 12, a Hindutva mob thrashed two nuns, accusing them of being engaged in conversion activities, and dragged them to the police station. Sister Gracy Monteiro, a school principal belonging to the Mirpur Catholic Mission and her colleague, Sister Roshni Minj, was waiting in a car when the mob attacked them and their driver. Speaking to the fact-finding team, Sister Monterio said: “There were just the three of us. I was accompanying Sister Minj, who was going home to Ranchi to visit her father. At Mau bus stand, Sister Minj went to ask about the vehicle while the driver and I stayed in the car. Then a mob came and attacked the driver, dragged him out, and forced us to walk to the police station.”

What happened in Roorkee and Mau was a continuation of a series of assaults and unsubstantiated allegations of conversion that began on January 3 when right-wing extremists attacked a group of about 20 Christians who had gathered in Shahjahanpur in Uttar Pradesh. Shockingly, after damaging property and injuring the worshippers, they informed the police about alleged conversion. The police arrested the pastor and three other worshippers.

Later in the month, in an eerily similar manner, religious extremists disrupted a church meeting in Kanpur. They accused the pastor, Pankaj Malik, of conversion and offering financial incentives to convert to Christianity. Yet again, the perpetrators called the police, who took the pastor into custody.

A month later, the walls of a Methodist Church in Bareilly were defaced. In February, when Pastor Anjeet Kumar was conducting his Sunday fellowship at his home in Ambedkar Nagar some villagers stormed in, hurled abuses at him and accused him of indulging in conversion. The police prohibited the pastor from inviting anyone for prayers though he was allowed to continue with his private worship.

In Prayagraj a few days later, where Pastor Jitendra Varma was leading a prayer service, a mob arrived with a police constable and started abusing the worshippers. Allegations of forceful conversions surfaced once again. Similar incidents were reported from Kanpur, Agra, Bijnore, Azamgarh, Rampur, Gonda, Raebareli, Auriya, Maharajganj and Jaunpur.

Significantly, the media ignored most of these attacks. And whatever came to public notice was the police version of what happened. Said John Dayal: “The media have toed the government line. The government says these are sporadic attacks, unconnected with one another. It is an utter lie. The Prime Minister objects, everybody objects, to a single Sikh attacked in Canada or a Hindu attacked in New York. The media goes to town. Tens of hundreds of cases of attack on Christians and Muslims are taking place back home in India but they do not interest the media much. The issue of attacks has not even been raised in Parliament in recent days. Even the Uttar Pradesh Vidhan Sabha has not talked of these attacks though the issue was raised in Chhattisgarh [Assembly].”