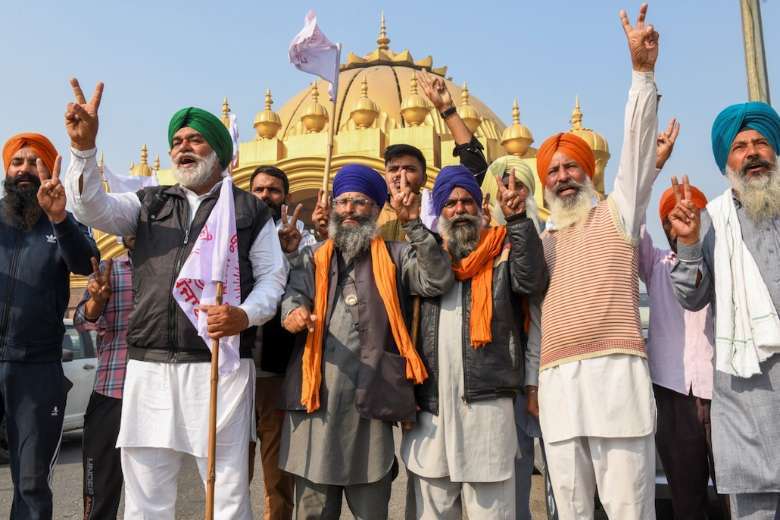 “It is a really a very welcome decision in the interests of farmers and the nation as a whole,” said Bishop Alex Vadakumthala, chairman of the office of labor of the Catholic Bishops’ Conference of India (CBCI).

Modi made his surprise announcement on Nov. 19 on the birth anniversary of Guru Nanak, founder of the Sikh religion. Many Punjabi farmers are Sikhs.

The PM said the laws were enacted for the welfare of the farmers but added: “We haven’t been able to explain to our farmers. This is not a time to blame anyone.”

Modi’s announcement came as farmers were planning to intensify their protest from Nov. 26 to mark the anniversary of their protest.

Farmers from the northern state of Punjab launched the protest against the laws — the Farmers’ Produce Trade and Commerce (Promotion and Facilitation) Act, Farmers (Empowerment and Protection) Agreement of Price Assurance and Farm Services Act, and Essential Commodities (Amendment) Act — last November

The farmers have since protested in New Delhi even after police blocked roads and disconnected power and water supply to their tents.

During the year-long protest, close to 700 farmers reportedly died for reasons including violence and suicide.

“The government should consider compensating the families of the farmers who died as in cases of natural calamity or epidemics,” Bishop Vadakumthala of Kannur in Kerala state told UCA News on Nov. 19.

“The perseverance of the farmers finally prevailed. If the government was not adamant and had consulted the farmers before enacting those laws, the inconvenience to the farmers could have been avoided. Our farmers are our backbone.”

Bishop Gerald Almeida, chairman of the CBCI’s Justice, Peace and Development Commission, said the failure of the government to conduct a thorough study before enacting the laws created the problems.

“The government promised to double the income of farmers with these laws but did nothing other than increasing the prices of fertilizers and other means the farmers required for farming,” Bishop Almeida of Jabalpur in Madhya Pradesh told UCA News.

“The laws were a body blow to small and marginal farmers and even medium famers faced its brunt as private parties seldom provided a fixed rate to farmers.

“Farmers get a benefit only when there is a fixed rate for their crops and only the government can ensure it. It is better now than never.”

Farmers had vowed to continue their protest as long as Modi remained in power and refused to accept any compromise other than repeal of the laws.

Bishop Almeida said the government’s change of heart could be related to upcoming assembly elections in Uttar Pradesh and Punjab among other states.

Uttar Pradesh, India’s most populous state with more than 220 million people, is a stronghold of Modi’s pro-Hindu Bharatiya Janata Party (BJP) but pre-poll opinion surveys indicate a loss of more than 100 seats to the party.

Punjab, the only Sikh-dominated state, has not even allowed BJP party leaders to hold public programs.

It also said that SKM will take note of all developments and hold a meeting soon to discuss the situation.

“The agitation of farmers is not just for the repeal of the three black laws but also for a statutory guarantee of remunerative prices for all agricultural produce and for all farmers. This important demand of farmers is still pending,” it said.

Parliament is due to convene from Nov. 29 for its winter session when the controversial laws will be repealed.

Read the story on UCA NEWS