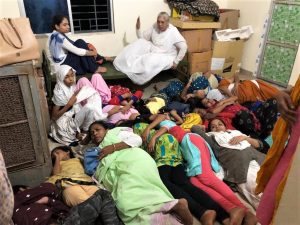 NEW DELHI (Morning Star News) – Hours after a Hindu nationalist mob assaulted and held more than 60 Christians against their will in central India under accusations of forcible conversion last month, police detained the Christians rather than the assailants, sources said.

The mob of about 500 Hindu nationalists on Oct. 17 descended on the Christians gathered for dinner in Oteband village, in Chhattisgarh state’s Durg District, searching their belongings, harassing them and physically assaulting some of them, witnesses said. Videos on social media showed the mob forcing the church members to line up as they searched their belongings and clothes, including women’s undergarments.

“Some men from the mob took me inside the house, where one person slapped me three or four times,” said Anil Tandon, who hosted the gathering of The Pentecostal Mission (TPM) church in Raipur to give thanks to God for healing him of illness. “Then they brought me outside and assaulted me there, too. While we were taken before the village panchayat [council], I was beaten there too.”

Police arrived but only observed the ordeal, and then at 1:30 a.m. officers put the Christians onto a bus that took them to the Nandini police station 38 miles away, witnesses said. Nandini police filed a complaint (First Information Report 0333/21) against Tandon and others under the Indian Penal Code for “injuring or defiling place of worship.”

Police presented Tandon, 35, before a district judge the morning of Oct. 18, who sent him to jail.

Local media reported that three people, Manjula, Poonam and Durga Sahu, along with others, were injured by the Hindu mob’s stones. Police confiscated 19 vehicles belonging to the Christians, which were released on Thursday (Oct. 28) after court hearings and procedures.

After his release from jail on bail on Oct. 20, Tandon denied all allegations of forceful conversion.

The complainant in the case against him was his friend and neighbor, Santosh Banjare, who had agreed to let Tandon transfer the dinner to his home after rain rendered Tandon’s smaller house untenable for the gathering. Denying that he tried to force Banjare or anyone else to convert to Christianity, Tandon said the Hindu nationalists forced Banjare to file the complaint they dictated to him.

The meeting began at 6 p.m. with 90 minutes of worship and prayer, and then about an hour of dining. No one from the village had any objection, but at about 8 p.m. Jyoti Sharma, a leader of the Hindu extremist Dharma Jagaran Samanvay Vibhag (Religion Awakening Coordination Division), arrived with eight to 10 others, Tandon said.

Someone from the village had informed Sharma, who lives in Bhilai 17 miles away, about the Christian gathering. She began to question the guests, accusing them of forceful conversion at the gathering, Tandon said. Dharma Jagaran Samanvay Samiti is affiliated with the Hindu nationalist Rashtriya Swayamsevak Sangh.

“I tried to explain it to them that it is a thanksgiving meeting, and all the attendees are members of the TPM church, but they would not deter,” Tandon said. “They continued to harass and started manhandling me and other Christian members.”

Sharma and her supporters continued to harass, interrogate and threaten the Christians even after police arrived, Tandon said. She also instigated local villagers, who grew in number to nearly 500 and pelted the Christians with stones as police looked on, he said.

“A police bus arrived to rescue us, but the Hindu mob did not let us board the bus,” Tandon said. “Instead, we were taken before the village headman, where they surrounded us and created a ruckus. The police force intervened and surrounded us, but the Hindu extremists still shouted allegations at us and then began to pelt stones at us. Several were injured after being hit by the stones.”

The 64 Christian guests were released at 3:30 a.m. only after Gurvinder Singh Chaddha, president of the All India Christian Community Rights Organization, signed surety papers for them, Chaddha said. Whereas police took immediate action on the complaint against Tandon, detaining him and all the guests including women and children, a First Information Report (FIR) against the assailants was filed without any further action by police, Chaddha said.

Police deliberately declined to name anyone in the FIR filed against the Hindu mob by Anurag Lal, one of the Christian guests, even though officers were witnesses to the stone-throwing and harassment, Chaddha said.

“An FIR was registered against unidentified people even when the police knew so many among the Hindu mob by name,” Chaddha told Morning Star News. “Several videos were recorded, and the perpetrators can be identified easily, yet the police deliberately overlooked the fact.”

Police overlooked assaults on Christians who were wrongly criticized and terrorized and their vehicles vandalized, he said.

“Jyoti Sharma has openly assaulted a Christian preacher, men and women with children in front of senior police officers using abusive words, and the police did not arrest her,” Chaddha said.

The FIR against the Hindu nationalists (FIR 0334/21) was filed under IPC sections for endangering human life, mischief causing damage and acts done by several persons in furtherance of common intention.

“The memorandum also included photographs of the incident and CDs containing several videos of the incident,” Chaddha said. “They have assured us of action and justice.”

A church member who requested anonymity was incredulous that police had made no arrests of the Hindu nationalist assailants.

“It is unimaginable that the mob assaulted Christians, took the law into their own hands, even in the presence of the police, but no action has been taken against the Hindu mob,” the Christian said.

The Religious Liberty Commission of the Evangelical Fellowship of India (EFIRLC) has documented at least 32 incident of violence and hate against Christians in Chhattisgarh this year.

“These incidents involve and result in Sunday prayer services being disrupted or stopped, physical attacks on Christians, vandalism at churches, social boycott of Christians and false accusations of religious conversions and in some cases arrests on the basis of false charges,” said Surender Pokhal, research and intervention specialist of the commission. “Many of these incidents remain unreported and unrecorded due to fear of further victimization.”

Tandon said he had been afflicted by disease for several years before God healed him.

“If I had not known Jesus, I would be dead by now,” Tandon told Morning Star News.

Tandon heard about the TPM church in Raipur and began attending worship services, and he gradually began to heal, he said.

“I had vowed to the Lord that when I am fully healed, I will keep a thanksgiving meeting and invite the brother [TPM pastor] and the congregation,” Tandon said. “And here I was completely healed.”

Read the story on Morningstar News