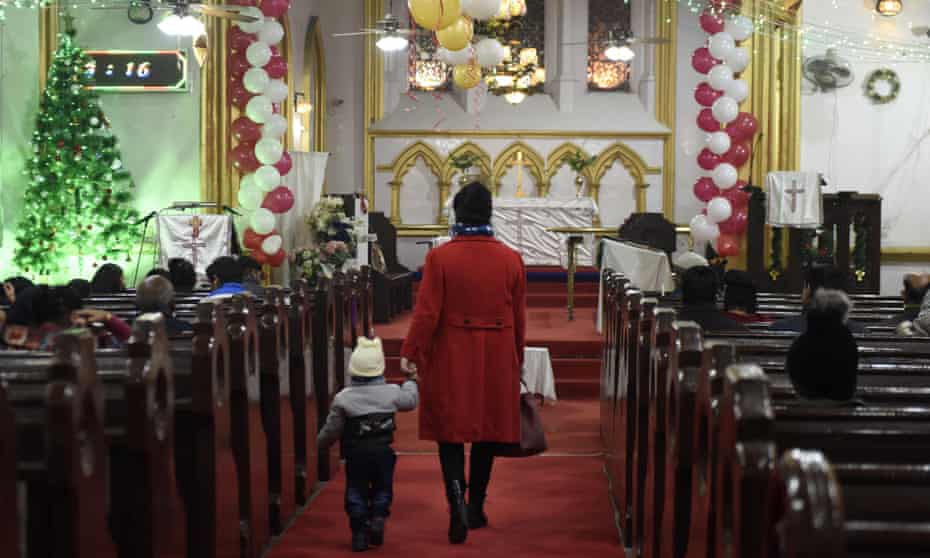 It was a stifling July afternoon when the crowd moved into the small district of Lakholi, in the Indian state of Chhattisgarh, and gathered outside the house of Tamesh War Sahu. Sahu, a 55-year-old volunteer with the Home Guard who had begun following Christianity more than five years previously, had never before had issues with his neighbours.

But now, more than 100 people had descended from surrounding villages and were shouting Hindu nationalist slogans outside his front door. Sahu’s son Moses, who had come out to investigate the noise, was beaten by the mob, who then charged inside.

As the men entered the house, they shouted death threats at Sahu’s wife and began tearing posters bearing Bible quotes down from the walls. Bibles were seized from the shelves and brought outside where they were set alight, doused in water and the ashes thrown in the gutter. “We will teach you a lesson,” some people were heard to shout. “This is what you get for forcing people into Christianity.”

Sahu’s family was not the only one attacked that day. Four other local Christian households were also targeted by mobs, led by the Hindu nationalist vigilante group Bajrang Dal, known for their aggressive and hardline approach to “defending” Hinduism. “We had never had any issue before but now our local community has turned against us,” said Sahu.

Since the beginning of the year there have been similar attacks across Chhattisgarh, already the Indian state with the second-highest number of incidents against Christians. In some villages, Christian churches have been vandalised, in others pastors have been beaten or abused. Congregations have been broken up by mobs and believers hospitalised with injuries. The police, too, stand accused – of making threats to Christians, hauling them into police stations and carrying out raids on Sunday prayer services.

The attacks have coincided with renewed attention on a longstanding claim from rightwing Hindu groups: that a string of forced conversions are taking place in Chhattisgarh. Such claims have been made by senior figures in the ruling Hindu nationalist Bharatiya Janata party (BJP), which governs India but is in opposition in the state government, as well as rightwing vigilante groups.

Speeches, rallies and press statements in recent months have openly attacked Christian pastors and activists for allegedly converting, through force and coercion, tens of thousands of people from tribal communities and poor, lower-caste Hindu families. They allege they are lured into churches by proselytising pastors offering cash payments, free medical assistance and foreign trips, funded by foreign donors. No evidence has been presented for these claims.

Dozens of “anti-conversion” rallies have been held across Chhattisgarh in the past month, as well as direct violent action On 29 August, 100 people, led by members of another rightwing group, Hindu Sara Ja Jagtar Samiti, tried to attack three churches in the district of Kawardha.

In the first church, in Polmi village, Pastor Moses Logan was conducting the Sunday prayer service when the mob burst in. Logan’s wife and mother were badly beaten, the church curtains torn down, musical instruments smashed and furniture destroyed. Logan’s clothes were ripped as the mob grabbed him and marched him to the local police station, where they attempted unsuccessfully to get a police report filed against him for conducting forced conversions.

As Logan’s car left the police station that night with an escort for safety, it was set upon by people waiting outside, who threw boulders and sticks and smashed the windscreens.

Hindu nationalist groups have attempted to file dozens of similar police reports against members of the Christian community, and in multiple incidents mobs have charged into police stations to try to force the arrest of pastors.

Senior BJP figures told the Guardian that forced conversions were now at the forefront of their agenda in the state.

“We are loudly challenging this issue because it will change the demography of the country and is a threat to law and order,” said Brijmohan Agrawal, a BJP former minister in Chhattisgarh who has spoken at several anti-conversion rallies. “These conversions are foreign funded and so those are who are lured in and converted will also be turned against India. Their patriotism then comes under question.”

Yet the Christian community in Chhattisgarh, which according to the last census numbers about 500,000, denies all charges of forced conversion as false and unfounded. Those who spoke to the Guardian said they had no outside funding and were involved in no active proselytising, as per the state law, though Bibles are often distributed in rural villages and slum areas.

Many members of tribal communities and lower-caste families in Chhattisgarh do attend church services, and they are referred to as “believers” rather than Christians. However, most spoke of first coming to church of their own accord seeking community or on the recommendation of a friend or neighbour. While dozens of complaints have been recently made to police against pastors, no official police reports have been filed nor any arrests made, owing to lack of evidence.

Chhattisgarh is one of nine Indian states that already have draconian laws regulating religious conversions. Those wishing to change their religion are required to gain permission from the local district magistrate, and anyone carrying out forced conversions can be punished with a three-year jail sentence.

Instead, many in the Christian community allege that they have become a political target, saying that the conversion claims has been revived by the BJP as a way to divide voters down religious lines and tarnish the reputation of the Congress party, which rules the Chhattisgarh state government.

“There have never been any tensions between Hindus and Christians before, this is a completely political issue,” said Obed Das, a pastor in Durg district who was recently threatened after he was accused of forced conversions.

Amit Sahu, the state president of the BJP youth wing in Chhattisgarh, claimed that tens of thousands of pastors and Christian activists were involved in forced conversions and said the plan was to catch them and “fill the jails”.

He said that across the state, BJP workers were being instructed to make lists of Christians they believed were converting tribal and Hindu families and keep them under surveillance. “When our party workers are aggressive, then no one can save these pastors,” said Sahu. “We will do anything to save our religion, to save our culture, to save our country.”

The impact on the Christian community has been palpable. Many spoke of being demonised in their own communities and living in fear or in hiding. Those who spoke to the Guardian agreed to do so only in remote locations so they would not be seen. Pastor Ashish Nag, of Good Shepherd church in Bagbahara, who was among those recently reported to the police for forced conversions, said he had been told he was now a target.

“I am worried and scared,” said Nag. “I have been told I’m under surveillance from these Hindu groups, and they report on my movements and who comes to my church.”

Harish Sahu, 43, a pastor at New Life Fellowship ministry church in Bhatagon, Raipur, had a police report filed against seven members of Bajrang Dal who had attacked him in a police station, and two arrests have been made, but police are now stationed outside his church during Sunday service for protection.

There are signs that the claims of forced conversions are now being taken up by the BJP and rightwing groups in other states such as Uttar Pradesh, Karnataka and Madhya Pradesh.

Some of the threats in Chhattisgarh have come directly from the BJP rather than fringe groups. In early August, Pastor Benu Mehananda, of Church of God church in Shamma, Raipur, was accused by two local BJP leaders of carrying out forced conversions. Standing outside his church, they told him if he did not leave the community he would end up like Graham Staines, the Australian Christian missionary who was burned alive with his two sons by members of Bajrang Dal in neighbouring state of Odisha in 1999.

“The BJP has no issue to attract voters here so they are using conversion to polarise the voters down religious lines,” said Mehanada. “The impact for Christians is terrifying. Some families have stopped coming to my services.”

Rishi Mishra, the state coordinator for Bajrang Dal, said: “Religious conversion is the biggest problem in Chhattisgarh and the top of our agenda. Until recently, this problem was limited to rural areas and the tribal belt. But of late they have started their work of religious conversions in urban areas, in an open and fearless manner.”

Read the full story in The Guardian