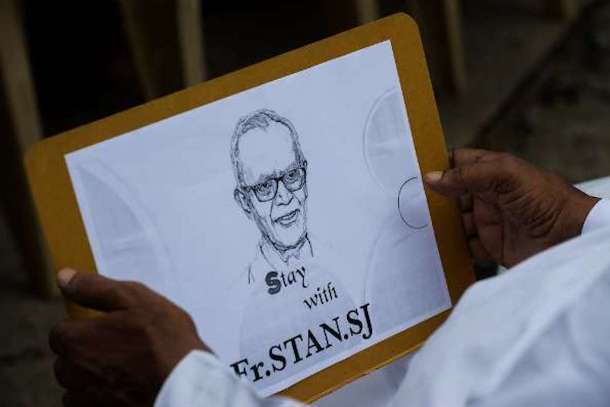 A Catholic priest holds a placard with the image of Jesuit priest Father Stan Swamy during a protest in Secunderabad on Oct. 21 against his arrest in the eastern Indian state of Jharkhand. (Photo: AFP)

An elderly Jesuit priest in detention in an Indian jail has moved court for regular bail after his application to use a straw or sipper to drink water and other liquids was rejected.

Father Stan Swamy, 84, has been in Taloja Central Prison in Mumbai, capital of Maharashtra state in western India, since Oct. 9.

The activist priest is accused of sedition and links with outlawed Maoist rebels among other offenses and charged under the stringent Unlawful Activities Prevention Act (UAPA) by the National Investigation Agency (NIA), a federal anti-terror combat unit.

The priest, who is suffering from many age-related problems including Parkinson’s disease, approached the special NIA court on Nov. 6 seeking permission to use a straw or sipper as he could not drink any liquid because of his shaking hands.

When it came up for hearing on Nov. 26, the NIA did not respond to the application positively and the request was rejected.

The counsel for the priest amended the application by retaining the demand for a straw or sipper along with a fresh request for winter clothes.

The court agreed to seek a report from the jail superintendent and adjourned the hearing until Dec. 4.

“On Dec. 4, the court may decide on the pleas of Father Swamy for his regular bail and other requirements,” said Jesuit Father A. Santhanam, who is monitoring the case. “The bail application will be decided based on merit rather than any other concerns.”

The court had earlier rejected an interim bail application by the priest based on his poor health and old age.

Father Santhanam, a practicing lawyer in Madurai bench of Tamil Nadu High Court, told UCA News on Nov. 26 that “it is regrettable that the court did not consider the genuine demand of an elderly person for a straw or sipper.”