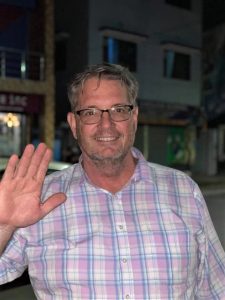 U.S. Pastor Stranded in India after Arrest on Declarations Charge

A U.S. pastor attending a Sunday School conference in India is stranded in the country after he was arrested for failing to report money he was carrying.

Pastor Bryan Nerren, 58, was traveling to Sikkim state in northeastern India for a Sunday school conference along with two U.S. pastors on Oct. 5 when they were detained at the Bagdogra airport, the closest airport to Sikkim. While the other two pastors were let go, Pastor Nerren was arrested when authorities alleged that he had violated the Foreign Exchange Management Act (FEMA) and the Customs Act by not declaring the cash that he was carrying for his trip and for conferences in India and Nepal.

“They showed me an email from the Delhi office directing them to detain and arrest me for breaking the law,” Pastor Nerren told Morning Star News. “I told them repeatedly that no one has told me that I need to declare this money. Not even the customs people [in Delhi] who interrogated us.

“I also told them that so far I have not stepped out of the airport onto Indian soil, and that I can go back to Delhi, fill in the necessary forms and come back to Bagdogra, or I can fill the forms right here, but they did not listen. They did not even deport me, but arrested me.”

Pastor Nerren was scheduled to visit Sikkim for four days and then go to Nepal for another nine days, but following his release on bail on Oct. 11 he is awaiting trial in Siliguri, a border city in the state of West Bengal, India. The Siliguri Civil and Criminal Court imposed a travel ban on him and confiscated his passport and travel money on Oct. 6.

Foreign nationals bringing foreign currency into India over a prescribed limit are required to fill in a form to declare it. If the value of the foreign exchange in the form of currency notes, bank notes or travelers cheques exceeds US$10,000, or its equivalent and/or the value of foreign currency notes exceeds US$5,000 or its equivalent, a form has to be filled to declare it.

The three U.S. pastors had arrived in Delhi, India in the early morning of Oct. 5 at around 1:30 a.m. by KLM from Amsterdam and had proceeded to obtain visas on arrival.

“I was not given any form by KLM in the incoming flight to Delhi that spelled out that I had to declare the currency I was bringing in,” Pastor Nerren told Morning Star News. “No one questioned us while we cleared immigration.”

After clearing immigration, Pastor Nerren was detained by customs officials who, during a security check for his connecting flight to Bagdogra, discovered the money that he was carrying for the conference and their trip.

“They detained us till after 4 a.m. and questioned me about the money I was carrying in my backpack and some in my travel pouch. I was not hiding that money nor concealing it,” he said. “Three investigators asked me questions for over an hour. They also questioned us separately. They asked me if I was a Christian and I answered in affirmative. They asked me the reason for carrying the money, and I truthfully answered that it was for a children’s conference and for my Nepal trip. Then they asked me if the conference was for Christians or Hindus and I told them that it would be a Christian conference.”

After questioning Pastor Nerren and the two others, the investigators cleared them and allowed them to board their flight to Bagdogra, he said.

“The investigator told me that he was convinced by the answers that I had given, and that we were free to go to Bagdogra. They shook our hands, smiled and let us go,” he said.

On landing at Bagdogra airport, however, two customs officials carrying Pastor Nerren’s photograph on their phones detained him, he said. They confiscated his passport and the travel money, arrested him and took him into custody. The other two pastors were let go, and it was then that officials showed him the email from Delhi ordering his arrest.

He was arrested under sections 104 and 135 of the Customs Act of India for failing to declare funds he was carrying.

After his arrest, he was not allowed to meet with anyone, including personnel from the U.S. embassy, he said.

The two other pastors were the ones who informed his family in the United States that he had been arrested and jailed.

“I suffer from sleep apnea and use a C-PAP machine to sleep, without which I can even suffocate and die during my sleep,” he said. “When I told the police officers about my condition and that I need the machine, they took me from one police station to the other so that my machine could be plugged in, but it was not possible. So they took me to the emergency room of the Medical Doctor’s Training Hospital, where finally I could use the machine.”

He faced some ill treatment at the small hospital, he said.

“When the doctor learned that I was a Christian, he spit on the ground and only then took a look at me,” Pastor Nerren said.

He added that nearly 20 people died during his nine-hour stay at the hospital.

“The patient whose bed was given to me soon passed away,” he said. “Another person who had already died was there in the room, and no one knew it till it was discovered by cleaning staff of the hospital. In all, three people in the room where I was died.”

After his first night at the hospital, Pastor Nerren was moved to the Siliguri Correctional Home, where he spent the next five days and nights. All jails in the state of West Bengal have been renamed as Correctional Homes.

During the six days he was in jail, he was taken to the hospital twice more for checkups. After six days in jail he was released on bail on Oct. 11, but under a travel ban.

“Pastor Bryan was arrested and presented before the court on Oct. 6 and was subsequently granted bail, but the bail conditions were harsh and required two bail bonds of 1 Lakh [100,000] rupees [US$1,412] each or local land papers in lieu of the bonds,” Choudhary told Morning Star News. “This was again challenged by me in the upper court on Oct. 9, and the bail was granted on Oct. 10 with relaxed sureties. The court this time asked only for two bail bonds of 10,000 rupees [US$141] each, and hence he was released on bail on Oct. 11.”

The pastor’s next court date is scheduled for Dec. 12, he said. His attorney has filed an application to the Customs department for the release of his passport and money, he said.

Pastor Nerren is staying with friends at an undisclosed location.

He first visited South Asia in 2002 with a trip to Nepal, where he started the Asian Children Education Fellowship, which has trained more than 20,000 leaders in Nepal, according to its website. The ACEF has also engaged in community development and social work digging community wells, holding medical clinics, and assisting in providing uniforms and books to over “2,500 children who would have never had the opportunity to attend schools.”

A native of Shelbyville, Tennessee, Pastor Nerren leads the House of Prayer Church, part of the International House of Prayer Ministries, along with his wife Rhonda. He has been to India three times before in the last 15 years. It was his involvement with Nepali churches that brought him to India this time.

His wife said in an Oct. 29 American Center for Law and Justice (ACLJ) update that he has done nothing wrong.

“His only crime is living out his steadfast love for Jesus. He’s my best friend, and I need him home,” she said. “My special needs daughter needs her daddy home. My son and his family want their dad and Grandpa ‘Popeye’ home. Please pray for our family. Pray for the hearts of the officials who have the power to give him back his passport and let him come back to us.”