top
Home•News •Fire at Historic Church Building on Easter Stuns, but Does Not Stop, Worshipers in India 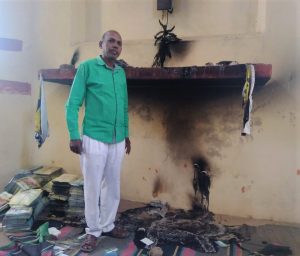 Fire at Historic Church Building on Easter Stuns, but Does Not Stop, Worshipers in India

It was a different kind of Easter celebration this year for Pastor Anil Juit of Maranatha Full Gospel Church in eastern India.

Opening the door of the historic church building in Arrah, in Bihar state’s Bhojpur District, on Easter Sunday (April 21), he found a gaping hole in the back wall, and everything inside had been gathered up and burned in a heap, he said.

As he made his way out at the end of the service, Pastor Juit noticed that someone had written “Jai Sri Ram [Hail, lord Ram]” on the outside wall of the church building.

“It is evident from the slogan that this is the work of some Hindu radicals,” he told Morning Star News, adding that he suspected the damage was done the previous night.

The church has used the once-vacant building of the Holy Saviour Church of Arrah for its services for five years with permission from the district superintendent of the Methodist Church in India, he said.

Local media portrayed the burning as part of a robbery, which he refuted.

“Nothing was stolen from inside the church, but a burnt heap of Bibles, religious books, drums, tambourine, banners, mats, etc. was found,” the 45-year-old Pastor Juit said.

When he filed a report at the area police station on April 22, officers told him not to mention the fire in his complaint, but only that it was vandalized, he said. The pastor said he regretted complying with their instructions.

“I have not been called for verification by the police since my complaint,” he said. “It is evident that no investigations have been done so far.”

Two policemen have been deployed at the church site every Sunday during worship services, he said.

“The Hindu extremists did not want us to celebrate Easter, so they destroyed all that they could,” he said. “Though we were very shocked and discouraged, we still decided to conduct the Easter Service despite no mats for the people to sit on.”

He added that the success of the Easter service was a message from the church to the assailants that, “no matter what, we will not be discouraged.”

Several parties claim ownership of the church building, including the Methodist Church in India and the state government, and a case is pending before the Patna High Court. Constructed early in the 20th century for King George V, who as king of the United Kingdom was emperor of India until his death 1936, it is also known as the “Church of George V.”

The Mounted Military Police, established in 1919 and the oldest wing of the state police of Bihar, has its headquarters on the same property as the church. The church building stands at a prime location in the middle of the city.