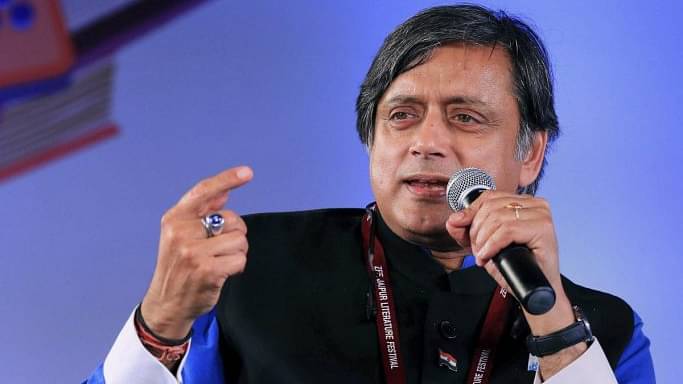 I think it is unfair to differentiate between different persecuted minorities because we are all human beings who deserve equal respect and dignity, he says

The enactment of the controversial Citizenship (Amendment) Act has triggered protests across the country as with each passing day there is fear that several of the citizens who elected this government could become non-citizens once the National Register of Citizens is implemented.

“This land does not and should not discriminate against any individual, regardless of where they may come from and what they may believe in. They have always been allowed to make this their home, to prosper and are free to be who they want to be. This Act undermines that rich tradition,” said Shashi Tharoor, Congress MP from Thiruvananthapuram. He was one of the Congress MPs who had submitted a notice to object even the introduction of the Bill in Lok Sabha.

Moreover, this government does not embody democratic values, pointed out Tharoor.

Edited excerpts of an interview with Shashi Tharoor:

How will the CAA damage the country? Could you also speak about its harm to the fraternity in India?

The CAA is an affront to the ethos of plurality and secularism enshrined in our Constitution by our forefathers who embraced these principles in the fight for Indian independence.Our Constitution embodies our rejection of the logic of Partition – Gandhiji, Nehruji, Maulana Azad, Dr Ambedkar never accepted the idea that religion should be the determinant of nationhood. This law is an offence with dire consequences for all communities in India and to the stability of India. It also violates the proud heritage of which Swami Vivekananda spoke in Chicago a century and a quarter ago, that India proudly has given refuge to the persecuted of all nations and religions. India has a history, since ancient times, of providing refuge to all who seek it here. This land does not and should not discriminate against any individual, regardless of where they may come from and what they may believe in. They have always been allowed to make this their home, to prosper and are free to be who they want to be. This Act undermines that rich tradition. The Act proves that the BJP thinks and acts like Pakistan, in its communal agenda for India. It is the first building block in the BJP’s attempt to make our country into a Hindutva version of Pakistan. The Act makes us more like the people who the persecuted non-Muslim minorities are seeking refuge from. In passing this communally-tinged legislation, the Narendra Modi government has successfully managed to set India on a dark path motivated by prejudice and bigotry from which we may struggle to return.

RA&W has opposed CAA as they fear national security, yet the government went ahead. What do you think?

The government is already faced with the international consequences of enacting the CAA as an Indo-Japan summit has been postponed, the Bangladeshi Foreign Minister has cancelled his visit to India, the International Court of Justice has stated that the CAA flouts India’s international obligations and a Federal US Commission has sought sanctions against Home Minister Amit Shah and other the key individuals involved in designing the legislation. The Citizenship (Amendment) Act has no place in the world of the 21st century. And the international community recognises that. On many global platforms, India has claimed leadership, but now the Indian example will no longer be admired abroad. A land that has in the past been hailed for its remarkably successful management of diversity will be seen as a narrow-minded majoritarian state. That ought to be something to worry about for all in this country.

Protests have already begun in the north-east against CAA. Do you think there will be much protests across the country when the CAA passes?

I am humbled by the courage and determination shown by the young student protesters (and others) spontaneously throughout the nation. I honestly don’t think they need apolitical party to hijack them. All parties should stand with them and support them with all the capacities at our command. We, for our part, are doing so.

Before first focusing on persecuted Hindus in neighbouring countries, shouldn’t the government be focusing on the silent majority of India, SCs, STs and MBCs, who are facing daily persecution at the hands of forward caste Hindus?

I think it is unfair to differentiate between different persecuted minorities because we are all human beings who deserve equal respect and dignity. When one’s fundamental human rights are being exploited, it is not a matter of ‘citizenship’ but one of humanitarianism. India can tend to many people in need, as it historically has. Ideally a bill that seeks to streamline the process of asylum, and eventually citizenship, for persecuted persons from neighbouring countries would reflect this open spirit of India, which accepts one and all. That said,the Indian society needs to work harder to rid itself of millennia-old prejudices against oppressed communities and fight casteism fiercely. But I would disagree that because minorities in India are suffering, India should not undertake to offer aid to persecuted people from neighbouring countries. Infact, fighting casteism in India and offering refuge are two sides of the same coin, if an ideal approach were to be undertaken.

Assam CM has already asked for a list of undocumented Hindus excluded from NRC. Do you think they will be now made citizens through CAA? If that happens, will the Opposition oppose it?

The Opposition vehemently opposed the Bill in both houses of Parliament and has now also challenged the legality of the Act in the Supreme Court. The CAA, regardless of the NRC, is a violation of the principles of the Indian constitution and as such the Congress Party and other like-thinking parties will protest it. The Assamese and other northeastern protestors are opposed to being swamped by new citizens from elsewhere, whether Hindu or Muslim, who they fear will dilute their cultural identity and their ancestral rights. But I will admit that theNRC makes the repercussions of the CAA more severe. The NRC and CAA have together unleashed an atmosphere of fear and a climate of bigotry that will sweep across the country, claiming Indian citizens as victims, generating chaos in the name of nationalism.

What do you think the government will do to the North-East with respect to CAA?

The North-East is the most recent Kashmir. The reality of a brute majority in a pluralistic country like India is that a communally driven party like the BJP can push forth illegal and unfair legislation like the CAA and revocation of Article 370 with little impact to its electoral standing. Already, the internet shutdown in Assam is affecting communication and daily lives of people,including affecting students who have to take exams.Just Tuesday evening I received an email from a worried Bengali Hindu third-generation student in Assam who pointed out that they are living in fear of reprisals against them by the local Assamese people who are worried that this Act will create an additional burden on them. This government does not embody democratic values. The North-East, much like Kashmir, will suffer from an undemocratic clamp down, as we are already seeing. The government, while justifying their decisions on Jammu and Kashmir, stated that the Indian Union is one and therefore there should only be one set of laws.However, the Home Minister has listed certain exceptions to the implementation of CAA in the North-East. Logically, they are unsound and constitutionally, they are in the wrong.

Why you think the Tamils from the Eelam have been excluded from the Bill?

It is curious that the government has, in the Act, singled out three Muslim majority countries from where to accept refugees even though, in fact, there are persecuted minorities in all our neighbouring states including Myanmar, with whom we share a long border, and which was governed from India

till 1935,and of course Sri Lanka. Such an arbitrary listing makes the government’s agenda apparent: they have a singular idea of what India ought to be and they shall amend laws to attain it. In this case, Tamil speaking Hindus persecuted in Sri Lanka do not qualify for India’s citizenship, perhaps because the BJP is only interested in Hindi-speaking Hindus! They want our country to be reduced to a majority Hindi speaking Hindu Rashtra.

Do you think NRC roll out in Tamil Nadu will cause problems for Tamils who were born in Sri Lanka, but have become naturalised citizens of India?

CAA has many legal and logical inconsistencies and it does not address some of these basic fundamental questions which undermine the simple statement that “Non-Muslim refugees” from Pakistan, Afghanistan and Bangladesh will be provided citizenship of India. Logically those who are already on the path to naturalisation should not be affected. How the government intends to implement the provisions of this law remain to be seen. One can only hope that it does not come to that and the Supreme Court renders it irrelevant by finding it unconstitutional.