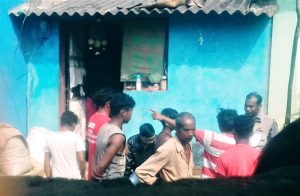 Tribal animists in eastern India earlier this month surrounded a church building with axes, threatened to kill Christians within and later burned down the thatched-roof structure, sources said.

“After we concluded the prayers and community lunch service [on Dec. 1], a batch of around 15 tribal men came with axes, surrounded the church and threatened that they will chop us into pieces,” pastor Bibudhan Pradhan told Morning Star News.

The assailants surrounded the pastor and his wife as they were trying to return to their home in another town, he said.

“They took us inside the village and held us hostage for more than four hours,” Pastor Pradhan said. “They abused us in vulgar language, words that I can’t utter with my mouth, and threatened us that their gods and goddesses will swallow us alive for propagating Christianity in an Adivasi [indigenous tribal] hamlet.”

He and his wife remained calm in captivity, he said. Church members told the assailants that the pastor had to return to his home in Rayagada and suggested they take them in place of him and his wife. The assailants released the couple with an ultimatum to stop worship services and never again enter the village.

They took no one else hostage, but that night they set the mud-and-bamboo structure on fire, the pastor said.

“Christians from the Adivasi hamlet reside about one kilometer far from the church site,” Pastor Pradhan said. “But the fire spread faster, and within 10 to 15 minutes the roof made of dry grass shattered, and the bamboos also caught fire.”

On Nov. 26, after village Christians had gathered for an hour-long prayer at the church site, a gang of drunken animists raided their homes as they slept, he said. The Christians were unable to call police as the area has no cell phone coverage.

Church elders rushed to Pastor Pradhan’s home the next morning.

“They were horrified by what happened the night before,” he said. “The drunk men abused the Christian families in filthy language and forcefully searched their homes for Bibles. The Christians tried hard to resist them to no avail. They gathered the Bibles from Christian homes at one spot at the center of the village, poured kerosene and lit fire.”

The animists, who worship gods based in ancestors, spirits and nature, ignored their pleas to calm down and spare their Bibles, he said. Pastor Pradhan and the elders complained to village elders that day.

“But the elders of Perigaon village justified the act of burning Bibles and in return abused me in filthy language,” he said. “They said that because of me the village has lost its rich culture and values, and that I had introduced a foreign faith, and that my presence and the Christian prayers in the village had hurt them deeply.

“They also issued threats that they would go to any extent to put an end to the spread of Christianity in the village.”

Nine of the approximately 75 families in Perigaon village are Christian, he said.

“My wife and I had been ministering in Perigaon for the past four years,” Pastor Pradhan said. “At least thrice the tribal extremists blocked us from entering the village by laying huge branches of trees on the road.”

Pastor Pradhan on Dec. 2 accompanied church elders to Rayagada police station to file a complaint about the Dec. 1 and Nov. 26 attacks.

Pallab Lima of the Minority Rights Forum of Odisha told Morning Star News that police did not take the complaints seriously.

“We insisted to police that a First Information Report [FIR] must be filed, and the church arson should be investigated,” Lima said. “But he was only summoning Christians to the police station and was not taking any action against the assailants.”

Inspector Nihar Ranjan Pradhan of Rayagada police station summoned Christians several times on Dec 2. and Dec. 6, forcing them to sign a document prohibiting them from worship in the village, Pastor Pradhan said.

“On Dec. 2 officer Pradhan forcefully took our thumb prints on a document that was written in Odiya that there will not be any Christian prayers in Perigaon village,” he said. “He was very biased and refused to listen to our pleas.”

After 10 p.m., police registered an FIR against the assailants based on a complaint by church elder Bhasker Rao’s wife, Sure Kadraka, under Indian Penal Code sections for mischief by fire or explosive substance with intent to destroy a house ordinarily used as a place of worship and criminal intimidation.

“Police held the suspects in custody for a while and sent them away,” Lima said. “No cases were registered against the assailants, who confessed that they had set the Bibles ablaze, held the pastor hostage and later burned down the church. We refused to sign on any document, but they took our fingerprints forcefully.”

Inspector Pradhan summoned them to the police station again on Dec. 6.

“This time, he was very angry that he was receiving phone calls from human rights activists enquiring about church arson,” Lima said.

Rayagada District Superintendent of Police Saravana Vivek told Morning Star News the inspector and sub-collector visited Perigaon, that a “peace committee” had been formed, and that police were looking into the matter “very closely and seriously.”

“We are concerned about each and every person’s safety,” Vivek said. “Whatever is legal and possible has been done.

“Tribals are dominant in Rayagada, and the tribal families’ sentiments have been affected.”

Vivek told Morning Star News that villagers were angry that a Hindu priest who had been granted land for Hindu worship had converted to Christianity, resulting in the rituals having ceased for the past four years.

The officer said the former Hindu priest has built a Christian house of worship on the land, and that he must renounce all rights to the land.

Pastor Pradhan told Morning Star News the convert had actually been a priest of tribal Adivasi religion, not Hinduism, and that the land had been the site of an Adivasi temple. The former animist priest is now church elder Bhasker Rao.

Since the Hindu nationalist Bharatiya Janata Party (BJP) came to power, its parent organization, the Rashtriya Swayam Sevaksangh (RSS) has been using the words “Hindu” and “Adivasi” as synonyms in order to promote the Hindu caste hierarchy. The use of this language among police and administrative officials is indicative of their Hindu nationalist leanings and connections with the RSS, sources said.

“The church’s site is one kilometer from Rao’s residence,” Pastor Pradhan said. “He was formerly the tribal Adivasi priest and has come to Christ four years ago. He has been under immense pressure from the villagers to perform the offerings and worship to Adivasi deities, but he resisted their advances.”

Rao was willing to relinquish the two acres of land granted to him by the Adivasis as well as two additional acres, the pastor said.

“He had requested the village council to take away a total of four acres from him and relieve him from the priest’s duties, but they demand that he only must perform the rituals, and that if he doesn’t do it, the entire village will be cursed, and that the tribal deities would swallow them alive,” Pastor Pradhan said. “He even suggested the council members to transfer the priestly responsibilities to any of his kinsmen and leave him free to follow Christ.”

Officer Vivek said civil administration officials are also involved along with police, and that police are trying to bring the Christians and assailants together for talks to avert future crimes.

Based on the complaint Rao and his wife filed, police should have filed more serious charges than they did, an attorney for legal advocacy group Alliance Defending Freedom-India, Pratap Chinchani, told Morning Star News.

Instead of taking stern action against the assailants, police have turned against the victims, with official documents telling them in essence, “There won’t be Christian prayers in the village – you move out of Rayagada and conduct your worship service elsewhere,” he said.

“How can police restrain the pastor from visiting the village? This kind of approach is illegal, and it must be legally challenged,” Chinchani told Morning Star News. “This inaction of police must be challenged in a court of law. As ADF-India, we are ready to incur the travel expenses for the victims to travel down to Cuttack, where the High Court is located [about 280 miles from Rayagada).”

Pastor Pradhan said villagers have threatened that if church members take legal action, they would expel the Christians’ children from government welfare hostels and forbid burials within village limits.

“They also demanded that Christians must fund Adivasi rituals and festivities, and if they refuse to donate, they will not be allowed to avail the government benefits or have the tribal status,” he said.

In the face of the threats, church members have decided not to pursue legal action. Chinchani practices at the Cuttack High Court 500 kilometers (310 miles) away, and the ADF-India team is offering them counsel through local contacts.

Odisha, formerly Orissa state, was the first to pass an anti-conversion law in 1967, attorney Chinchani said. Forbidding conversion by inducement or fraud, the law is commonly misused to file false charges against Christians in attempts to stop the spread of Christianity.

Officer Vivek said villagers alleged that people have converted to Christianity by means of inducement, which the church members deny.

“The former priest had also converted seven other families to Christianity,” he said.

In 1973, the High Court of Orissa declared the anti-conversion law contradicts the Constitution of India’s guarantee of freedom and belief, Chinchani said.

“The court held in its conclusions that article 25(1) of the Constitution ‘guarantees propagation of religion and conversion is a part of the Christian religion,’ that the term ‘inducement’ is vague, and that the state legislature lacked the competence or jurisdiction to make the law in question on the topic of ‘religion’ under the Seventh Schedule of the Constitution,” he said. “It has always been a hard time for Christians in this state.”