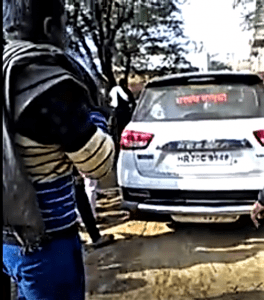 Before Pastor Jai Singh appeared before a judge in northern India and was jailed on false charges of luring people to convert, Hindu extremists had dragged him from house worship to a school where groups of six beat him in turns, he said.

“From the school, they took me to a Hindu temple and forced me to sit before the idols,” Singh said. “They told me that they ‘are policemen, we can make you admit whatever we want.’ They had beaten up my legs with wooden sticks and pulled my legs apart.”

He was wearing a long, white tunic called a Kameez that was soaked in blood from the beatings on Jan. 5 in Bichpari village, Sonipat District, about an hour north of Delhi.

“They forcefully undressed me and threw my Kameez away,” Pastor Singh told Morning Star News. “It was evening by the time they dropped me at Gohana police station. I was severely bruised and was howling in pain.”

The radical Hindus had assaulted him and other house-church worshippers after an attempt to attack their mother church in nearby Siwanka over Christmas was thwarted, sources said. The pastor, who struggles to provide for his family as a day-laborer, is still unable to walk due to the severity of the beatings, they said.

Police took Pastor Singh to a hospital, where he received an injection, then returned him to the police station. Soon Inspector Shri Bhagwan registered a First Information Report (FIR) against him, pastor Ram Kishan of Siwanka and three other unnamed persons based on a complaint by a Bichpari resident identified only as Ramesh, the pastor said.

The FIR falsely accused them, Naresh Singh and several other Christians of offering money to Hindus to lure them to convert to Christianity, he said. The next day, Jan. 6, he was presented before a judge and sent to judicial custody.

“Unknown persons in plainclothes were driving me to the court and then to the jail,” Pastor Singh told Morning Star News. “At first I suspected that they must not be a police officer as the persons were not in uniform. The journey from court to jail was torturous, as this person in plainclothes abused in vulgar Haryanvi language. He abused my family members, including my wife and children. I kept quiet and said in my heart, ‘Oh Lord, if it is in Your will, then let it be, but give me strength to endure this. I am weak. I need you.’”

An attorney with legal advocacy group Alliance Defending Freedom-India filed a petition for bail, and he was released on Jan. 7, he said.

“Even inside the jail, I was very afraid that I might have seizures – I was under medication, and the jail authorities did not allow me to take my medicines,” Pastor Singh said. “Now I’m in a very bad state. I can’t sit or stand or lie down straight on my back for five minutes. The marks of beatings are still all over my body. My legs feel very heavy and stiff, so that I can’t even stand on my feet.”

After he was treated at a hospital in Sonipat District, an undisclosed Christian organization has enabled him to receive treatment from a hospital in Delhi, he said.

Vinod Kumar, son of accused Pastor Ram Kishan of the mother church in Siwanka, said the same radical Hindu assailants had shown up at that congregation’s Christmas celebrations. Church members did not let them enter the premises.

“We kept watch that day and stopped them from causing any disturbance,” Kumar said. “They could not do anything and waited outside for a while for a chance to attack but, vexed at us restraining them, they left without causing any harm.”

On the first Sunday of 2020, the assailants then showed up at the Bichpari village house church and attacked Pastor Singh, home-owner Naresh Singh and his relatives.

“Their minor children also suffered injuries,” Kumar said. “Pastor Jai Singh is a native of Siwanka. He is not able to sit or stand or walk as of now. It seems there are internal injuries that would take time to heal. There was a crack in Pastor Singh’s right leg, and by God’s grace it is healing.”

Pastor Singh said a mob of 250 to 300 people initially surrounded the house during the Jan. 5 worship. Naresh Singh went out to find out what they wanted, and those inside suddenly heard the mob attacking him.

Before they could go outside to help him, about 30 assailants burst into the home and began shouting at them in foul language, Pastor Singh said. Naresh Singh’s female relatives tried to stop the radical Hindus from attacking Pastor Singh and were shoved away, injuring the women and children, the pastor said.

“Minor children of Naresh Singh and his brother also got injured,” Pastor Singh said. “Then they held me by my collar and dragged me outside the home.”

Accusing him and Naresh Singh of being responsible for the growing number of people converting to Christianity, the approximately 30 assailants beat them while the rest of the radical Hindus looked on, he said.

“They pushed me to the floor, and I could not understand who was kicking me, who was slapping or beating on my back,” Pastor Singh said. “As a huge crowd surrounded me, I could only see their hands and shoes kicking me. They picked me up from the floor and took me inside Singh’s home and told me that I should go with them, if not they would kill me there on the spot.”

Pushing him into a vehicle, the assailants ranted at him in foul language, he said.

“They uttered disgustful, caste slurs against my faith and community that I cannot repeat with my mouth,” Pastor Singh said.

At the school they beat him on his forehead close to his eyes, he said.

“My eyes got swollen. There was severe bleeding from my forehead,” he said. “The remaining members who were following us by motorbikes and other vehicles also reached the school, and they took turns to beat me. A batch of six assailants would beat me up at once, after that they would sit back and relax while the next batch of five to six continued the beating. I was howling in severe pain, and I do not remember for how long that continued.”

They tried without success to force him to falsely admit to luring Hindus to convert with money, he said.

Denying that he would ever offer people money to convert, the father of four began to weep as he said, “I am just a daily laborer – my children and family are leading a very difficult life. I do not have enough means to bring up my children, I can’t even provide them a nutritious meal.”

Kumar, the pastor’s son in Siwanka, said Hindu extremism has increased in the area as the number of people putting their faith in Christ has grown.

“The Hindutva [Hindu nationalist] government is in power in the center as well as the state, and they have been elected twice consecutively,” he said. “They strongly believe that the rise in Christianity was possible ‘by giving money to convert,’ which is not the reality actually, but at the ground level people have been made to believe this narrative.”

A source said on condition of anonymity that high-caste Brahmins are the main opponents of Christianity in Haryana state, but they remain veiled by utilizing the Hindu extremist Vishwa Hindu Parishad (World Hindu Council), Bajrang Dal and allies to do their bidding.

The assailants of the house church in Bichpari were members of the VHP, Bajrang Dal and the Hindu extremist Rashtriya Swayamsevak Sangh (RSS), area Christians said.

“Earlier there was good strength of believers in Bichpari, but now they are very scared and backslidden due to the rising opposition,” Pastor Singh said.

“I was doing the Lord’s work and also was working very hard to earn some money to feed my children,” he said, tears welling up in his eyes. “Now I have been made as fit for nothing.”

The Jan. 5 attack resulted in the closing of Naresh Singh’s shop at the market center in Bichpari.

“After the Jan. 5 attack on our home church, the owner of the shop called and told me to vacate the premises immediately,” Singh said. “It has been two weeks, and we don’t have any earnings since then.”

“It was the only source of livelihood for my family,” Singh said. “In the shops, the villagers refuse to sell us daily necessities. We have been socially ostracized. Even the neighbors and friends in the village, who had long been our regular visitors, do not even look at us now. We were beaten up, but police registered cases against our people.”

Singh filed a complaint at Gohana Sadar police station, and officers registered an FIR against alleged assailants identified as Pappu Sarpanch, Sonu, Ravi, Sunil, Jagbir and Sarpanch of Jagsi village, and about 200 other unnamed persons, he said, adding that no action has been taken against them.

The FIR accuses them of disturbing religious assembly, voluntarily causing hurt, abduction and criminal intimidation under the Indian Penal Code, “but they are all roaming free,” Singh said. “Only Pastor Jai Singh spent three days in custody after getting beaten up brutally.”