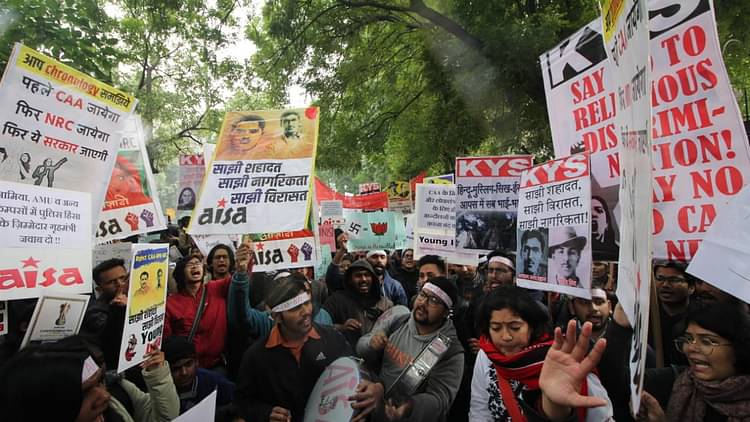 Number of protests against CAA-NRC in various parts of country is increasing, not decreasing. Contrary to claims being made by top BJP leaders in public rallies and media statements

The number of protests against CAA-NRC in various parts of the country is increasing, not decreasing.  Contrary to claims being made by top BJP leaders in public rallies and media statements, the countrywide movement against the Citizenship Amendment Law and the National Register of Citizens is gathering strength with each passing week.

Less than two weeks ago, on January 10, a fact checking site monitored 261 CAA-related protests across 24 States of which 230 were against the law and only 31 were in favour. The latest data compiled by the same agency on January 23 shows that the total number of protests has risen to 374, of which 322 are anti-CAA-NRC and 52 are pro.

What is interesting about the database is that an interactive web page has been put up to regularly update the statistics based on news reports, social media posts and verification by local police stations.  Although it is a private initiative, it provides a useful overview of the geographical spread of protests across the map of India as well as a satellite view.

The site (protestmonitor.factchecker.in) utilizes available digital technology to enable location-wise details that can easily be cross-checked by local citizens.

For instance, by clicking a location in Madhya Pradesh,  one gets the following information:  Date: 18 January, 2020;  Location:  Indore, Badwali Chowki, Madhya Pradesh;  Description:  A protest against the new citizenship law and NRC continued on the fourth consecutive day in the Badwali Chowki area in Madhya Pradesh. The protesters, including a large number of women, raised slogans and held placards.  Source:  New Indian Express

Another example:  Date 13 Jan, 2020; Location:  Allahabad, Uttar Pradesh;  Description:  The protests raging against the amended citizenship law and NRC have received support from the Seers at the ongoing Magh Mela on its 8th day. The Seers, who are on a kalpvas at Sangam, not only termed the new law as divisive but also said a Buddhist Shuddhi Yajna will be performed for the government soon; Source:  News18

It is evident, therefore, that it has the ring of authenticity despite being private venture.  The Mumbai-based data journalism site ( factchecker.in) has built up a reputation since 2014 as a reliable forum on which various statements and claims by public figures are scrutinized and researched for veracity. Similar sites that have gained a degree of credibility in India in recent years are BoomLive and AltNews.

As far as Protest Monitor is concerned, it does not claim to be an exhaustive database, but rather a collaborative effort to document what is turning out to be one of the most unique peoples’ movements in India’s socio-political history. It is based on ‘crowd-sourcing’ inputs and seeks to remain non-partisan, providing available information on both anti-CAA citizens’ protests as well as counter campaigns organized at the behest of the party in power.

At a time when fake news and doctored videos have become rampant in the mainstream and social media and even government ministers and opposition leaders often knowingly utter false statements and suppress information, fact-checking sites provide an alternative to the citizens striving to distinguish between truth and untruth.