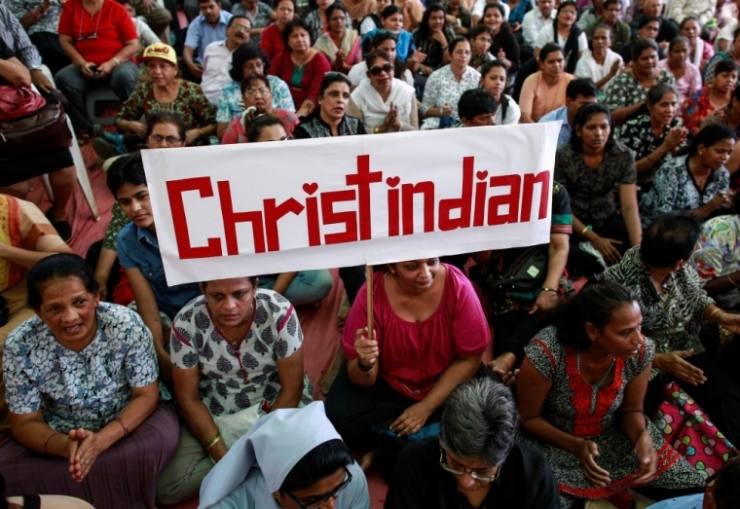 Christian leaders criticize the act of reconverting Christians to Hinduism

A protester holds a placard during a rally by hundreds of Christians against recent attacks on churches nationwide, in Mumbai, February 9, 2015. Five churches in the Indian capital New Delhi have reported incidents of arson, vandalism and burglary. The latest was reported last week when an individual stole ceremonial items. (Photo: Reuters/Danish Siddiqui)

A Hindu group that claims to have reconverted 144 members of a tribal Christian community in Dang district in Gujarat was highly criticized by church leaders and activists in the country.

Several years ago, as many as 144 tribal members accepted Christ and embraced Christianity as their new faith. But according to a religious leader from the region, the 144 were reconverted to Hinduism in Waghai taluka’s Bhogadiya village.

In an event organized by the Gujarat unit of Agniveer on January 24, Neha Patel, state president of Agniveer, told media that “We came to know that many tribals were converted to Christianity many years ago and many of them expressed interest to convert back to Hinduism, so we organized this program.”

According to Patel, of the 144 people who converted to Hinduism, 60 were from Bhogadiya village and the rest from neighboring villages.

“We have not forced anybody to change their religion. Since long ago, Christian missionaries have been converting Hindu tribals to Christianity. We will continue holding similar drives to bring more tribal Christians back to Hinduism,” Patel said.

According to Shweta Shrimali, police superintendent of Dang, no complaints have been registered against anyone and the police will examine if the conversion happened voluntarily.

Ramu Chaudhary, one of the tribals who converted to Hinduism said, “I embraced Christianity around eight years ago. I was very sick at that time and the missionary people took good care of me. After I was cured, I converted to Christianity. Now I realize that since my ancestors were Hindu, why remain a Christian?”

For Sajan K. George, president of the Global Council of Indian Christians “No Hindu organization ever brought succor to the Dangs the way the Christian missions did. The Church came here a century ago when there was little but despair.”

George further questioned “Where were all these Hindu leaders when they were rotting in poverty? These preachers showed us the true path and gave us dignity.”

Father Cedric Prakash, a human rights activist, told UCA News that “The agenda of the Sangh Parivar (communal forces) has always been divisive and discriminatory and this is clearly visible in their so-called ghar wapasi (reconversion) program. For several weeks now, the Sanghis have been trying their best to vitiate the atmosphere in the area.”

Another Christian leader, Jesuit Father Prakash told that “Their game, as in the past, is to divide and rule, to spread rumors and falsehoods. A very convenient manipulative act of theirs is this so-called ghar wapasi program.”

Fr. Prakash, who is based in the state capital Ahmedabad, noted that no one is sure whether these converted Christians are locals or brought from outside or for that matter if these were actually Christians. “Anyway, for those in the Catholic Church, we are convinced that the faith of the people is unflinching,” he added.