top
Home•News •Hindu radical ‘anoints’ Christians with water and cow dung, as if they were Dalits 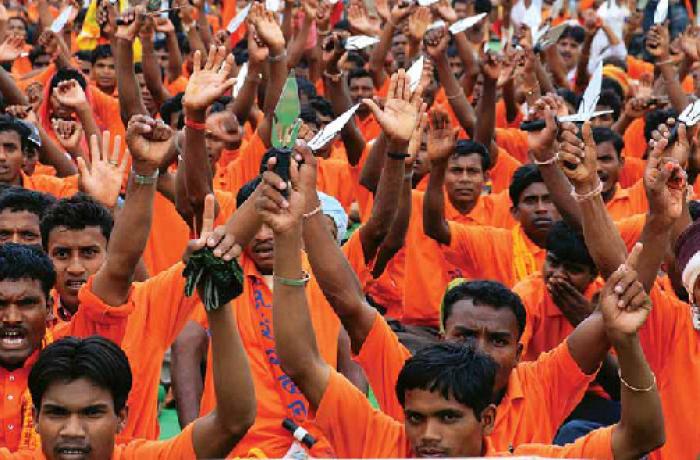 Hindu radical ‘anoints’ Christians with water and cow dung, as if they were Dalits

Such a “blessing” is a typical purification ritual used against untouchables, deemed impure from birth. In Uttar Pradesh, ultra-nationalists are targeting 30 places of “forced conversions”. Whilst “Conversions do take place,” and it is “a right,” said a priest. People “leave behind witchcraft and the worship of evil spirits.”

A man chasing a group of Christians to “anoint” them with water mixed with cow dung in order to “purify” them from their faith is the prime character in a video posted yesterday on social media.

The incident, which occurred in Machilipatnam Mandal, Krishna district, Andhra Pradesh, has been viewed thousands of times.

For Sajan K George, president of the Global Council of Indian Christians (GCIC), this is but latest episode of discrimination against India’s Christian minority.

“This,” he told AsiaNews, “is the pathetic situation in which Christians live, dishonoured in public because they praise the name of Jesus.”

“Water and cow dung are usually used for purification rituals, especially if Dalits touch something making the place or object ‘impure’,” George explained.

“Below the video, someone wrote that ‘Christian pastors came to foist their propaganda and conversions but were chased away by throwing water mixed with dung on their faces.”

“In Telugu-speaking states (Andhra Pradesh and Telangana), such an action is considered an appalling way to show displeasure towards visitors.”

In Hinduism the cow is holy. Some groups of fanatical Hindu nationalists who call themselves ‘cow vigilantes’ believe they have the right to use violence against anyone who does not worship these animals.

Yet, despite its holiness, once dead a cow cannot be touched by members of high castes. Disposing of carcasses is thus a task reserved for Dalits, once called untouchables.

For the GCIC president, this kind of incident is a sign of other worrying aspects.

“In Uttar Pradesh the Vishwa Hindu Parishad[*] (VHP) has targeted 30 places in eight districts where Christian missionaries are said to carry out forced conversions.”

The VHP “has pledged to check all conversions from Hinduism and its activists plan to accompany gurus to the places where Hindus have embraced Christianity.”

George is concerned that “these places will become easy targets for far-right nationalists who will impose a reign of terror among the vulnerable Pentecostal minority of Uttar Pradesh.”

Fr Vineet Vincent Pereira knows all too well what this means. He was arrested on charges of forced conversion.

“Conversion do take place,” he notes. “It is a fact and it is a right. It is a conversion of life. In a few prayer centres, people come to pray. They experience healings, then they abandon ancient beliefs and accept Christ.”

Even so, “People do not give up their culture or good practices; they leave behind witchcraft and the worship of evil spirits.

“Each prayer centre makes them better Hindus, better human beings. No centre speaks badly of other religions. We speak of our God, the Bible and the values ​​of the Gospel.”