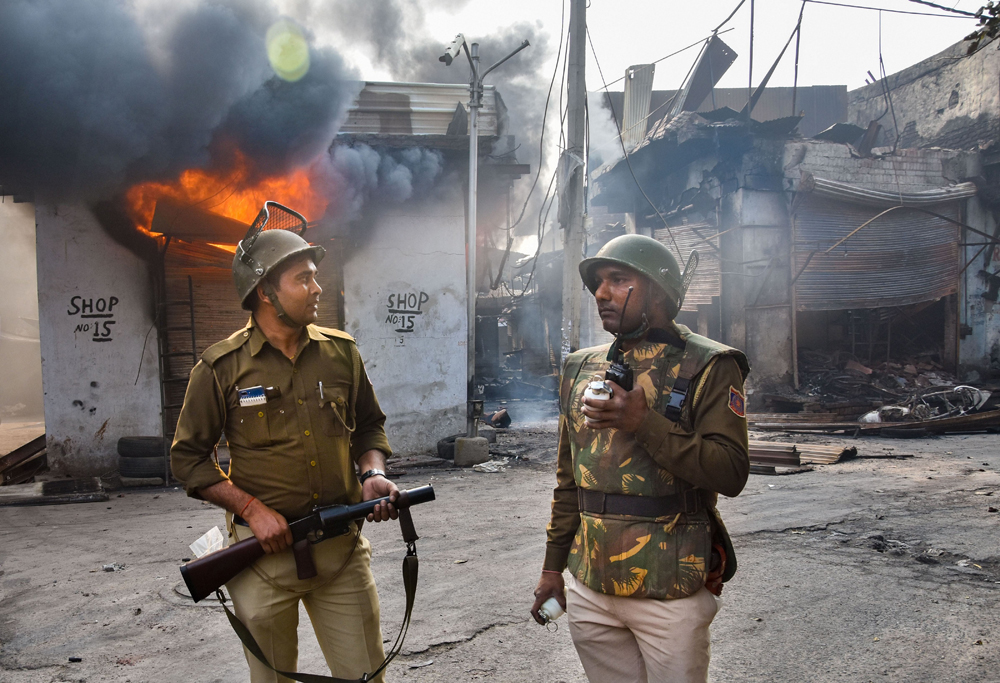 Two governments, both handsomely elected, have presided over the beast’s banquet that the capital has been since Sunday night — Prime Minister Narendra Modi’s and chief minister Arvind Kejriwal’s.

Here’s some of what’s been served out so far on their watch: 27 snuffed human lives, more than 200 injured souls, many of them grievously, thousands scarred and scared and fleeing, the debris of inestimable property torn and charred, the wantonly desecrated remnants of places and objects of worship, cocktails of sectarian passion stirred and set aflame.

It’s a job beat constables or area station house officers (SHOs) are expected to do, it’s a job warders and councillors and MLAs are expected to do; that the NSA had to step out and move lane to lane, door to door resounds with the abject abdication of administrative and political authority.

Between a Prime Minister immersed in his never-before enactments as host to US President Donald Trump and a chief minister so befuddled he took resort to silent prayer at Rajghat, Delhi was surrendered to the anarch. Modi was in palpable disregard, focused on fawning about the high-voltage American visitors; Kejriwal dithered in ways that belied the massive mandate the city had just handed him.

Modi’s apparatchik were gas-lighting fires, Kejriwal’s Aam Aadmi Party (AAP) appeared to have resolved that the fence was the best place to sit and wave the crisis off.

Failure is an insufficient word to assign to the two dispensations that govern the national capital; criminal dereliction and truancy more aptly describe their response to the grimmest rioting Delhi has seen in decades.

This city has an embarrassment of authority, by far the best provided of our cities when it comes to instruments of enforcing security and public order.

The Republic Day parades are a showcase of just how many hues and varieties of formations are at the government’s command. But very often — as in 1984 (Delhi), 1992 (Bombay), 2002 (Gujarat) and this week — the state appears uninterested in deploying them to quell disorder.

Professor Ashutosh Varshney of Brown University, who has done seminal academic work on the nature of communal rioting in India, is right to see in the current violence the clues to a pogrom which he defines as “a special class of riots when the state police, instead of acting neutrally to crush riots, looks on while mobs go on a rampage, or explicitly aids violent mobs”.

Northeast Delhi lies littered with evidence of both license to vandals and, often, assistance to them by those entrusted with maintaining law and order. The complicity runs at many levels and forced Delhi High Court to harshly remark upon on Wednesday. Why, the judges asked, had the Delhi police not even registered complaints against BJP leaders publicly inciting violence, among them the junior union finance minister Anurag Thakur, Delhi BJP MP Parvesh Verma, newly elected party MLA Abhay Verma and defeated BJP candidate Kapil Mishra.

There is little to suggest any of them regrets their rabble-rousing and its consequences. On the contrary, they seem to wear their ignominy with pride and have been rewarded by their bosses. A day after Parvesh Verma made inflammatory remarks against the Shaheen Bagh protesters, the BJP picked him to lead the motion of thanks to the President’s address in the Lok Sabha.

Collectively, these voices have constituted for nearly a month not just the threat but the promise of sectarian wrath. Kapil Mishra it was who kindled this week’s fires by declaring, in the presence, and probably protection, of senior Delhi police officials that he and his followers will disregard the law and law enforcement and take to the streets after President Trump departed. In the event, the mob lost patience and overran Mishra’s embargo.

Trump chose a resounding silence on the havoc playing out in his vicinity, but that changed nothing about the nature of the beast set free as he banqueted at Rashtrapati Bhawan.

Delhi has had its first day of respite from mayhem this week, but that has not made it any less tragic or portentous. It has also been a day that the count of the dead and the injured has mounted to the worst toll since 1984.

The embers are warm, smoke still billows from parts and stains the sky, fear and freshly-whetted anger and animosity have not been expunged from the rent air. Neither has that question that remains ruefully unanswered: if Delhi police and their bosses could get a grip on Wednesday and restore relative order, why not earlier?

The key person in all of this, Union home minister and custodian of Delhi’s security, Amit Shah, the man who hasn’t uttered a public word yet on the ugly pirouette of maddened mobs, would probably have a few answers.