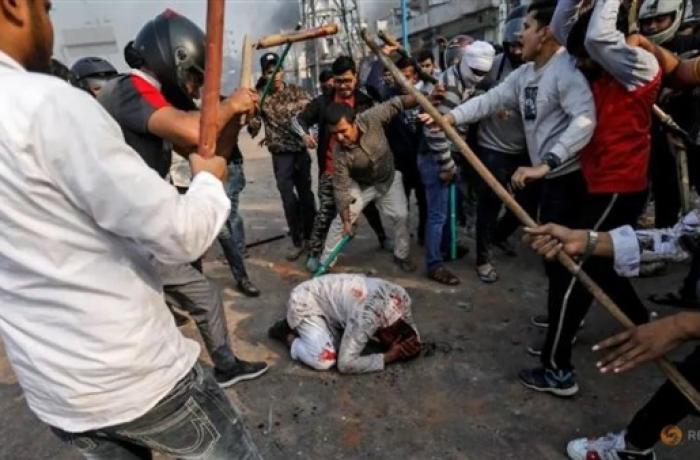 Protests erupted between groups for and against the citizenship law. Among the victims, a rickshaw driver married for a month. A protester challenges a policeman by pointing the gun at his face. Trump announces three billion dollar military deals.

At least seven people died, including a policeman, and another 150 were injured in the clashes that broke out yesterday in Delhi during the demonstrations for the new law on Indian citizenship. It is the most tragic toll to date in a single day of protests since the legislation that discriminates against Muslims was approved in December 2019, precisely on the days when US President Donald Trump is on a state visit to India.

While Trump and his wife Melania landed at Ahmedabad airport, clashes were taking place in the north-east neighborhoods, mostly populated by Muslims. The riots had started since the evening before and today the police are under investigation, unable to predict and contain the situation.

The clash took place between protesters in favor and against the citizenship law. After it erupted in the Jafrabad area, urban guerrilla warfare spread to the areas of Chand Bagh, Maujpur, Bhajanpura, Kardampuri, Gokulpuri, Khajuri and Karawal Nagar. The rioters set fire to parked cars, shops along the way and petrol pumps. The most critical moment was when a boy, later identified as Mohammed Shahrukh, pulled out a gun and fired shots at demonstrators, then challenged a policeman who was trying to stop him by pointing the weapon at his face.

Among the victims is Shahid Alviun, a rickshaw driver hit by a bullet. His brother told the BBC that he got married just a month ago. Another deceased is Rahul Solanki. According to his brother, he had left the house to go to the grocery store when he was surrounded by crowds and shot by while running away.

Yesterday Arvind Kejriwal, recently re-elected Chief Minister of the capital, condemned the violence declaring that he was “very saddened by the news that reports the disturbance of peace and harmony in some parts of Delhi”. Then he urged Federal Minister of Interior Amit Shah, who has responsibility for public safety in Delhi, “to restore public order”. Today renews the appeal for peace and invites “everyone to refuse violence”.

Meanwhile, the US president and Prime Minister Narendra Modi have announced the signing of three billion dollar military deals. According to experts, the exchange of defense technology, which includes airplanes, missiles, rockets and ships, is also anti-Chinese. The visit of the head of the White House took place as expected, without hitches due to the echo of the protests in the capital: after the inauguration of the new cricket stadium, where he was applauded by 100 thousand people, he went with his consort to Agra, where he visited the Taj Mahal in the romantic sunset hours.