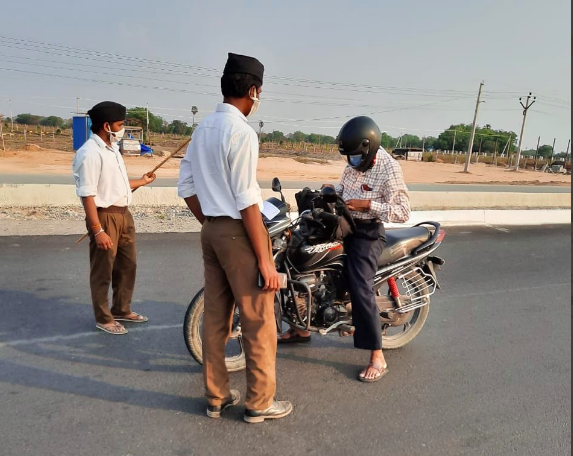 RSS workers were also given official permission to manage rice distribution at PDS shops in the state’s Kamareddy district.

As photographs on social media showing RSS workers manning a police check post in Telangana triggered a row, officials on Sunday said no permission was given to the volunteers and they were told to leave the place.

The police inspector in charge of the check post, has since been shifted and attached to the headquarters, police said adding no case had been registered over the incident.

Indian Express has quoted Rachakonda police commissioner Mahesh Bhagwat as having said, “This is the job of the police and we can do it. No permission has been given [to the RSS workers].”

The RSS, on its part, dismissed as ‘false’ the reports about its members checking ID cards at checkposts and said these were motivated by “narrow and vested interests”.

They sought to know how RSS activists “carrying lathis” were allowed to man check post and ‘verify’ documents of motorists crossing it and demanded registration of cases against them.

Majlis Bachao Tehreek party spokesman Amjed Ullah Khan in a statement demanded clarification from chief ministerK Chandrasekhar Rao and sought to know whether it was soft- Hindutva policy of the TRS government or some pro-RSS officials in Telangana government doing it on their own.

However, police said some college students in civil dress offered to volunteer and assisted the police personnel at a few check posts in food and water distribution for lorry drivers last week.

All of sudden they came in RSS uniform on April 9 and took some photos near the check post and they were not allowed and told to leave the place, a senior police official said.

Reacting to the reports, Rashtriya Swayamsevak Sangh Telangana State Secretary Kacham Ramesh said workers of the outfit do not interfere with the work of the administration and take up activities only after getting proper concurrence.

The current news in some sections of media and social media alluding that Sangh swayamsevaks are checking ID cards in Telangana is false and motivated by narrow and vested interests,” he said in a statement.

Ullah Khan also claimed that RSS workers were given official permission to manage rice distribution at PDS shops in Kamareddy district by the tehsildar on April 1.

But, Kamareddy District Collector A Sharath rejected it, saying there was no involvement of any volunteers and the government employees were clearly told to carry out the door-to-door distribution themselves.

Around 10 days ago, the tehsildar of Kamareddy planned to involve volunteers for maintaining queue at fair price shops and when we came to know, I warned the tahsildar to drop it. The ID cards of volunteers which were prepared were immediately cancelled. No volunteers were involved, the collector told PTI on Sunday.