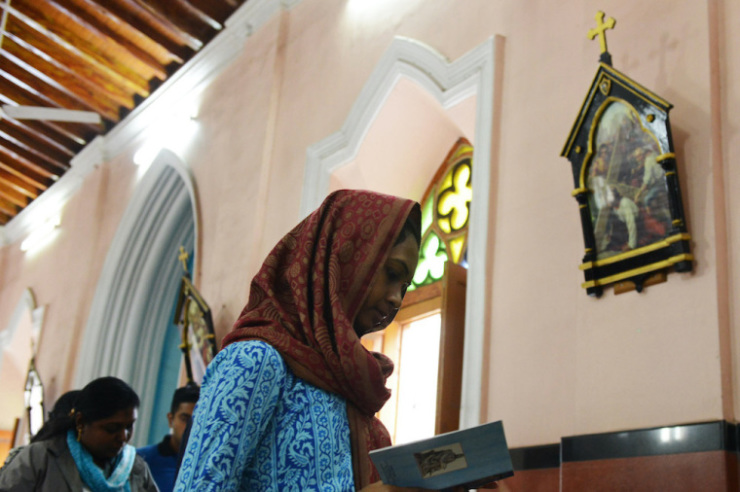 Indian Catholic devotees offer the way of the cross prayers after an Ash Wednesday service at Saint Mary’s Basilica in Secunderabad, the twin city of Hyderabad, on March 5, 2014. AFP via Getty Images/Noah Seelam

The chief of a Hindu nationalist group has launched a nationwide campaign against “forcible” conversions to Christianity.

In a media interview, Milind Parande, the General Secretary of the Vishwa Hindu Parishad, or World Hindu Council, claimed that Hindus were being forced to convert to Christianity and Islam.

“They (Christian missionaries) are destroying the ancient culture and indigenous religion of the tribals (aborigines),” Parande told the Times of India. “They are resorting to trafficking of their children. The VHP will not allow this heinous conspiracy to succeed.”

“Issues like love jihad, where Hindu girls are lured to marry Muslims, are also being brought back. Every year, we bring back at least 2,000 people who have got converted.”

Several Indian states have had draconian “anti-conversion” laws, termed as Freedom of Religion Acts, for decades but no Christian has been convicted of “forcibly” converting anyone to Christianity.

Most attacks on Christians are launched under the pretext of the alleged “forcible” conversion of Hindus.

According to India’s own population data, the conspiracy of mass conversions to Christianity does not hold up, says the U.S.-based persecution watchdog International Christian Concern. “In 1951, the first census after independence, Christians made up only 2.3% of India’s overall population. According to the 2011 census, the most recent census data available, Christians still only make up 2.3% of the population.”

Attacks on Christians have been on the rise since Narendra Modi of the Hindu nationalist Bharatiya Janata Party took office as prime minister in 2014.

“The view of the Hindu nationalists is that to be Indian is to be Hindu, so any other faith — including Christianity — is viewed as non-Indian. Also, converts to Christianity from Hindu backgrounds or tribal religions are often extremely persecuted by their family members and communities,” Open Doors added.

Earlier this month, authorities in a southern Indian state of Karnataka removed a statue of Jesus and 14 crosses from a Christian property after radical Hindu groups alleged a Christian center was being used for religious “conversions.”

The 12-foot statue and crosses were taken down from Mahima Betta, a Catholic cemetery and center, in Doddasagarahalli, about 30 miles north of Bangalore in Karnataka state, according to Catholic News Agency.

Officials had recently “called all communities and said there had been complaints about conversion,” J.A. Kanthraj, a spokesperson of the Archdiocese of Bangalore, told the Indian news channel NDTV. “People, however, said there was no problem and no conversion was happening. But two days ago, the tahsildar (official) brought police and a JCB loader, and without any notice, oral or written, they removed the statue and the stations of the cross.”

During his first official visit to India, U.S. President Donald Trump praised Modi’s record in governance and his willingness to discuss religious freedom. While Trump was in the country, the city of Delhi, the nation’s capital, was witnessing religion-based violence.

Less than 10 miles from Hyderabad House, where Trump and Modi met in Delhi, a targeted spate of violence killed at least 53 people, mostly from the Muslim minority. Trump told reporters during a news conference that he and Modi “did talk about religious freedom” for “a long time,” and stressed that he “really believes” religious freedom is what Modi wants.