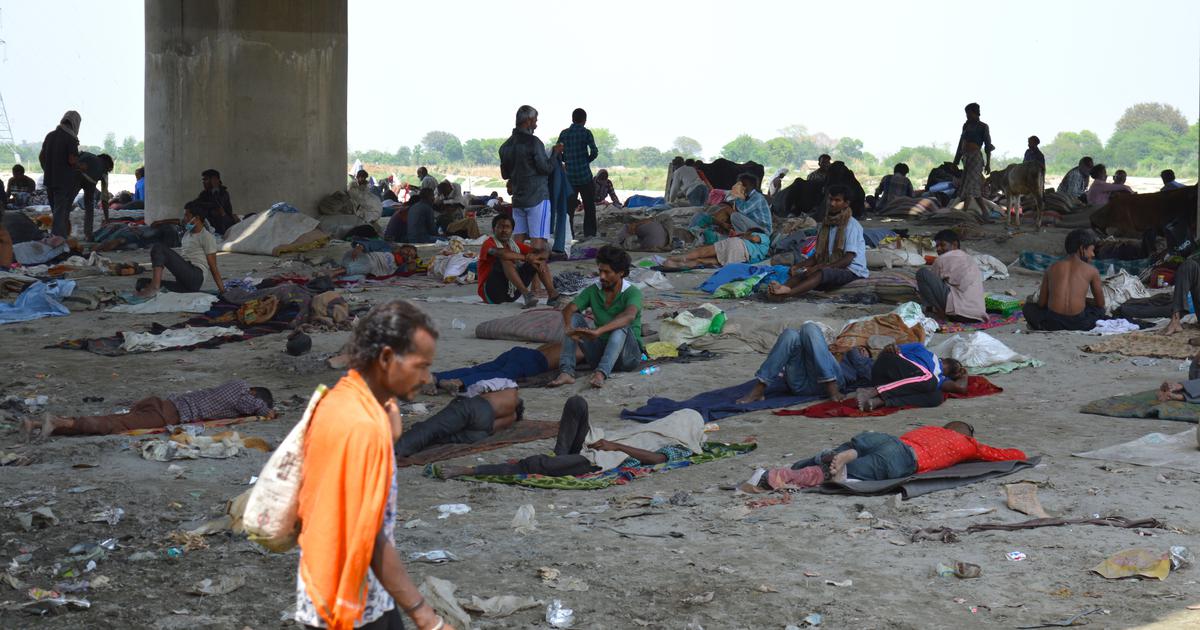 Migrant workers allege the administration stopped serving them food after shelters were set ablaze on Saturday.

The banks of the Yamuna in Delhi have swollen up with men who cannot go home. On Tuesday afternoon, some lay curled over nothing more than a gamcha or cloth towel. A few guarded their bags and belongings by using them as pillows. Others had nothing on them apart from their clothes.

Hundreds of these daily-wage earners are now confined to the garbage- and excreta-laden shores of the river near Kashmere Gate, less than 10 km from where Prime Minister Narendra Modi delivered a televised speech in the morning telling Indians why a three-week nationwide lockdown aimed at containing the coronavirus epidemic had to extended by another fortnight.

These men are rural migrants who survived in the nooks and crannies of Old Delhi, picking up whatever work came their way – construction, plumbing, loading goods, pitching tents for events.

But no one has earned a rupee since March 21 – the last day work was permitted in Delhi before the lockdown began. Their meagre savings have run out. With transport shut, they have no way to get back to their families in villages across North India.

They are utterly and completely dependent on the Delhi government for food.

Yet, for nearly three days, they said, the government did not feed them.

“No food has been served to us since the night of the fire,” said a middle-aged man, who requested anonymity. “For two nights, I slept on water.”

On the evening of Saturday, April 11, three steel cabins built as night shelters for the homeless were set ablaze allegedly by disgruntled inmates. The cabins had taken in 104 workers after the lockdown began, an official said. The courtyard-like space between the shelters was used to run a community kitchen to feed others who remained without shelter. The numbers of people being fed was between 3,500 and 9,000, according to officials.

The events leading up to the fire are murky with contradictory accounts about violence sparked by alleged food shortages on Friday, culminating in a body being fished out of the river on Saturday.

While workers allege the body is of a young man who jumped in the river to escape police beatings, the shelter authorities deny this. The police claim the body remains unidentified.

Seven people have been arrested for the Saturday arson. But the workers say they were collectively punished for it – the administration did not serve them food over the next two days till Tuesday afternoon. A few managed to get food distributed by a Sikh group, but most went hungry.

Even before the lockdown began, the banks of the Yamuna were home to daily-wage earners. “But only 200 to 250 people,” said Vijay Arumugam, who lives in a plastic-sheet shanty built on the river bank. “The numbers shot up over the last month as the public began to come here.”

Born in a family of Tamil-speaking migrants, Arumugam, 35, has spent his entire life in Delhi. He said his family lives in Mukherjee Nagar in the north of the city, but he found it more convenient to live in this area since his work, first as a coolie at the bus terminal, then as a labourer in the tenting business, centred around here.

For a few days after the lockdown began, Arumugam continued to cook his own food – he is not enrolled in the public distribution system, he said, but he had some savings to buy his own rations. Eventually, however, he ran out of money and joined the food queue. The meals served by the government were not bad, he said. “On the day of the fire, shahi paneer was served for lunch,” Arumugam said.

But on Friday late afternoon, the day before the fire broke out, he claimed the food ran out. “Someone threw a stone in anger at the centre waale [shelter authorities],” he said. “The police then began to beat up people. A young man jumped into the river to escape them.” Arumugam claims to have witnessed the man jumping into the river. He did not know his name.

Two young people, aged 15 and 20, who did not want to be identified, claimed his name was Suraj. “He used to play gilli danda with us,” said the 15-year-old. Beyond the fact that Suraj was from “outside” – not a resident of the Yamuna bank – the teenager did not know much about him.

Suraj evidently became a target of the police because he was wearing a red shirt, the teenager said. “The man who threw the stone was also wearing a red shirt. So the police came and held Suraj,” he claimed. The young man escaped and jumped into the river, the teenager said, adding that he had not personally witnessed this. “Four others jumped to save him but he drifted away.”

The next day, a body was brought to the shore. The teenager and his 20-year-old friend insisted that it was Suraj. “We saw it ourselves,” he said. The authorities claimed the body had been found upstream of the river. “But how can that be the case? How can a body float up?” The two young people alleged foul play. “Even Suraj’s clothes had been changed.”

Armugam vouched for the fact that a body had been brought ashore. He said many had been able to identify it.

Soon after, the three shelters were set on fire.

Nishu Tripathi, 33, works for Safe Approach, the non-profit organisation to which the Delhi Urban Shelter Improvement Board has outsourced the management of the Yamuna Bank shelters. For eight years, Tripathi has been the supervisor of the three shelters that were set on fire.

He said the arson on Saturday was set off by “rumours” about a body found on the Yamuna bank.

The morning after the fire incident, a report in the Indian Express had quoted him as saying a resident had jumped into the Yamuna on Friday. “Four more jumped in to save him,” Tripathi said. But speaking to Scroll.in on Tuesday, he said he had been misquoted. “According to me, no one drowned,” he said. “The body was found on the opposite side of the flow of the Yamuna and that has no relation with the shelter.”

The deputy commissioner of police for North Delhi Monika Bhardwaj told Scroll.in that the body had not yet been identified.

But what about the allegations that food had run out on Friday, provoking clashes between the workers and the authorities?

Tripathi had a slightly different account to offer. There was no friction over lunch, he said. It broke out around 5 pm when civil defence volunteers were distributing fruits to the residents. These volunteers are local residents who are helping the government enforce the lockdown. Tripathi said around 50 volunteers, aside from 30 staffers, were placed around the shelters to control the crowds and maintain physical distancing norms.

“One group pounced on the fruits and the civil defence volunteer moved them to the back of the queue,” said Tripathi. A member of the group hit a volunteer on the hand. “I do not know if it was a knife or a blade but the volunteer’s hand was cut and it was bleeding.”

Tripathi claimed after this, the crowds swelled up, some ran towards the shore and started pelting stones at the staff and volunteers. The police quickly brought the situation under control, Tripathi said.

Some workers blamed “blaze baaz” – blade wielders – for souring things for everybody. “Because of them even shareef aadmi [decent people] are suffering,” said a man, who did not want to be identified. “Roti paani ki ab bahut takleef hai.” There is now a major scarcity of food.

After the fire on Saturday, Tripathi and his team are no longer working at the shelters. The community kitchen has stopped functioning. Instead, the district magistrate’s office was supplying cooked meals to those stranded on the Yamuna bank, said NH Sharma, the director of night shelters at the Delhi Urban Shelter Improvement Board.

But several workers told Scroll.in that no food had not been served by the authorities since Saturday – until Tuesday afternoon, when a food truck appeared down the road from the shelters, leading to the formation of a long queue.

Mukesh Singh, a daily wager who stood in the queue, said he was waiting for the lockdown to be lifted, so he could go back home to his family in Tehri Garhwal district in Uttarakhand. “We are scared of the virus but the biggest thing is that we have nowhere to go,” said Singh, who has been working in Delhi for nine years. “I live in the mountains. How will I reach there now? We want the lockdown to open.”

Near the shelters, another group of workers had echoed the same sentiment. They had heard Modi’s speech on a smartphone that morning. “Modi ji must give us two or three days to go home,” said Ajay Mishra, a migrant worker from Hardoi district in Uttar Pradesh. “Bimari ho to bharti kara dein, bimari nahi hai to bhej dein.” Those who have the disease should be admitted to hospitals, those who don’t should be sent home.

Half a kilometre away, Shiv Kumar Kashyap, a worker from Bilaspur district of Chhattisgarh, said it was understandable the government did not want migrants to go home to prevent the spread of the coronavirus disease. “But they should make some arrangements here,” he said. “Where will we get soap and clothes from? There is no work, no money. Kehte hai safai karo, haath dho baar baar, kahan se dhoyenge.” They say wash your hands again and again, but how do we do this?

The workers said no soap had been distributed. Masks were handed out once, but flimsy ones that tore easily.

They were bathing in the dirty river, collecting drinking water from leaks in the pipes passing through the area.

A group had come to distribute bottles of cola, said a man who did not want to be identified, but they were past the expiry date.

Why had the government not been able to create more shelters for the men?

Sharma, the director of night shelters, said that the ten shelters in the Kashmere Gate area can usually accommodate 875 people. But given the physical distancing required in view of the coronavirus epidemic, only 450 people were taken in – 104 of them in the three shelters that were set ablaze.

Eighty of these 104 inmates had been moved to a temporary shelter at a school in Kashmere Gate’s Chabi Ganj, Sharma said. Another 535 shelterless people had been identified and would be moved to other facilities.

However, even a 15-minute walk down the Yamuna revealed a much larger number of people living on its banks.

Sharma himself conceded around 3,500 people were being fed by the community kitchen running at the shelters until Saturday. Tripathi, the supervisor of the shelters, estimated the number to be 9,000 – three times higher.

In the absence of shelter, nearly a hundred men crowded under a bridge built over the Yamuna, the only durable protection from the hot sun. Their cloth mats were spread close – far too close. No three-foot distance as recommended for protection against the coronavirus. “Aabadi zyada hai, chaav kam hai,” said a man who did not want to be identified. “There are more people and less shade.”