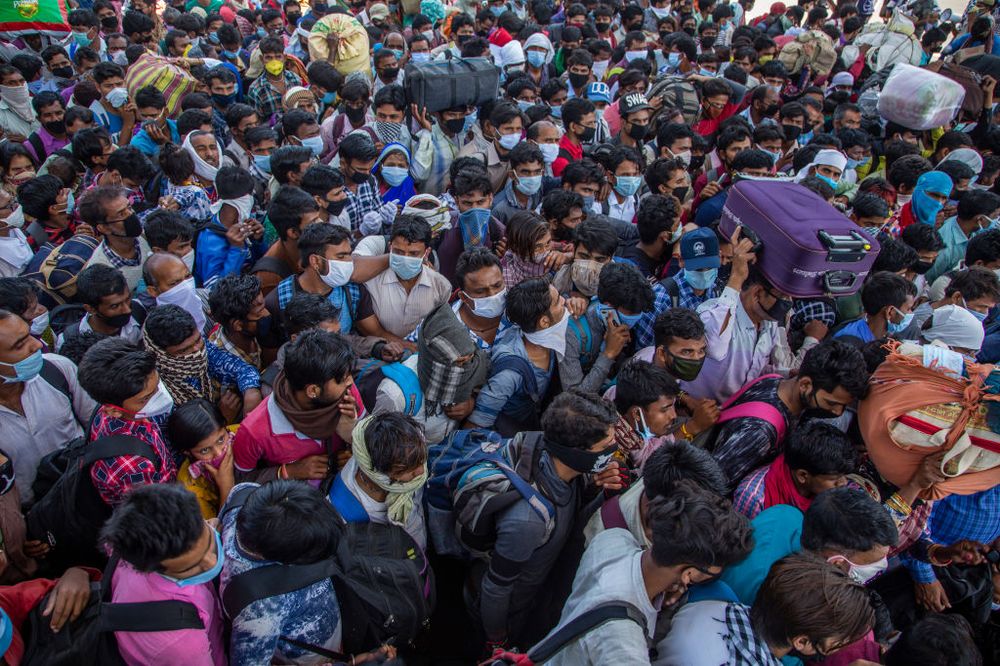 The government should have anticipated how a nationwide lockdown would impact the urban poor.

The largest lockdown in history is not, to put it mildly, going as planned. Within a few days of Indian Prime Minister Narendra Modi announcing on national television that the country was being shut down for three weeks, hundreds of thousands took to the country’s highways, marching long distances back to their home towns and villages. Others thronged bus stations—the trains are not running—hoping for a bus back home. At least 22 people have reportedly died in the mass migration, exhausted and hungry.

The point of India’s lockdown, as elsewhere, is to prevent transmission of the novel coronavirus. But, if anything, this vast movement of people likely means the virus will find its way to the poorer rural parts of India where it could do the most damage. There’s certainly little social distancing in evidence in the photos of thousands of people jostling each other waiting for buses.

All this could—and should—have been avoided. There was no need for the government in Delhi not to prepare citizens for what a lockdown would entail. Nor was the government itself anywhere near prepared for what the crisis would ask of its own resources.

It can make no excuses for this failure. Given how minimal quarantining and testing has been, it’s been obvious for weeks now that some kind of Wuhan-style shutdown was inevitable in the world’s second-biggest country. And yet the government seems to have worked harder on its own public-relations battle than on figuring out how the lockdown would affect India’s poorest people.

This reflects something deeply callous about the Indian state. The government should have recognized that those who earn a daily wage, who might not be able to make rent or even eat, would need to leave cities for their homes in the countryside. Part of the reason it didn’t is that these people have always been invisible to the Indian state. Successive governments have sought to set up welfare systems targeting farmers, or workers in the formal factory sector, or rural women. And, when this administration’s relief package was announced, it was precisely those groups who received aid.

Yet those who have taken to India’s highways are the urban poor and recent migrants, who receive very little welfare because they made the mistake of moving away from the villages where they vote and receive their food ration. By relying in this crisis on the same welfare system that pretends they don’t exist, the government left them with no other option but to pack up and leave.

Officials probably didn’t want to get adventurous about their relief package and push out more money, quickly, through the channels that already exist. But, as I argued last week, any such shutdown requires the government to move beyond its comfort zone and do things it hasn’t before. At the very least, Modi himself should have had words of reassurance for those most at risk when he announced the shutdown. Part of the Modi mystique is that he himself emerged from relative poverty, making his government’s blindness to the poor at this moment that much more depressing.

The scenes that played out after the lockdown—policemen beating up grocery shoppers and deliverymen, exhausted 90-year-old ladies walking 400 kilometers, migrants being hosed down by a chlorine solution—have exposed the cruelty that too often infects India’s dysfunctional state machinery. This is awful at any time but it’s particularly dangerous now, when the lockdown’s success as a public health measure depends upon public cooperation and trust in the government.

This deafness to the needs of its own citizens is, in fact, part of why the Indian state struggles to respond to emergencies. Yes, India is a democracy and its leaders are accountable to citizens. But the state itself does not always behave like a democracy should. Democracies do well when every level of the state machinery works to anticipate what people need. Here in India we have authoritarian instincts combined with democratic liberties. It makes for an ineffective combination—and one that is particularly ill-suited to fighting a pandemic or minimizing human suffering.