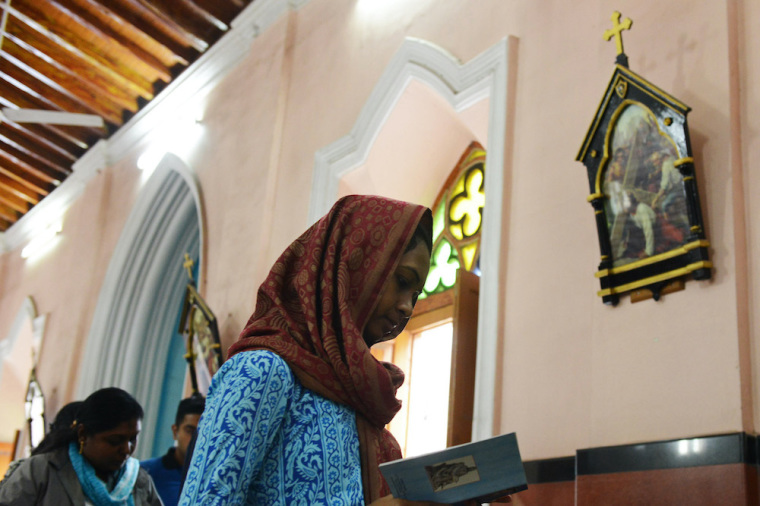 Christians in India see dramatic increase of attacks in 2020

Indian Catholic devotees offer the way of the cross prayers after an Ash Wednesday service at Saint Mary’s Basilica in Secunderabad, the twin city of Hyderabad, on March 5, 2014. | AFP via Getty Images/Noah Seelam

Attacks on Christians and their places of worship in India continued to escalate in both number and severity in the early months of 2020, with 27 violent incidents reported in March alone.

United Christian Forum in India, a Christian organization that advocates on behalf of Christians in India, documented 56 threats against Christians as well as 78 incidents of violence between January and March of 2020.

On March 12, a mob attacked a pastor and his 6-year-old son because they were running a house church. The mob reportedly forced the pastor’s 8-year-old daughter to strip and threatened to beat her to death if she did not comply.

On March 15, a mob of 300 individuals attacked a church service in Kunda Thana, located in India’s Uttar Pradesh state. There, the pastor of the church was beaten by the police and falsely charged with using the church for criminal offenses.

Persecution watchdog International Christian Concern warns that while India’s national lockdown in response to the COVID-19 pandemic has slowed down the number of attacks on Christians, such attacks will likely return when the lockdown is eventually lifted.

“More must be done in India to secure the rights of the country’s Christian minority and bring the perpetrators of these attacks to justice,” says ICC.

India is ranked 10th on Open Doors USA’s World Watch List of countries where it is most difficult to be a Christian. The organization says that Christians in the country face “horrific” levels of violence from extremists, with thousands of attacks taking place every year.

Incidents targeting Indian Christians have risen steeply since 2014, when Narendra Modi of the Bharatiya Janata Party came to power, according to Open Doors, which notes that at least one Christian was attacked every day last year.

John Prabhudoss, chairman of the Federation of Indian American Christian Organizations of North America, told The Christian Post that Modi’s reelection has “brought about a sense of confidence among the Hindu radical party cadre that now they can attack the Christians and other religious minorities (Muslims) with impunity and they do not have to worry about the law enforcement.”

“Most Christian victims in the past could not go to the police but now it is almost certain that only victims will be charged by the police if they go to them. The police are scared of acting against Hindu party members who are attacking the Christians,” he said.

According to Prabhudoss, President Donald Trump’s “ringing endorsement of Modi and the Hindu government’s handling of the religious violence in India has further strengthened their resolve.”

“The entire Indian Christian community is deeply disappointed in the president’s continued praise for Modi even after he returned from his recent India trip,” he said. The show of approval for Modi has “left the Indian Christians wondering why.”

Prabhudoss has had discussions with the White House officials after Trump’s return from India earlier this year and “offered some recommendations,” but has yet to hear a response.

He urged Sam Brownback, the U.S. ambassador for International Religious Freedom, to “include India in the agenda this year and bring victims of violence from India to tell their stories in the [Annual Ministerial Conference to Advance Religious Freedom] conference.”

“I have made it very clear to the White house over several meetings that America’s continued support to the Hindu radical party leaders in India is not in the long-term national security interests of the United States,” he stressed. “Continued support to the Hindu radical party would only result in internal civil unrest in India that could adversely affect America’s security and trade interests in that region. Yet, the U.S. is blindly supporting the Hindu nationalist government.”

Brownback told CP in March that he would not go as far as to say improvements are being made when it comes to the condition of religious freedom in India. He also noted that Trump “did raise the issues with Modi privately.”

According to Persecution Relief, which tracks anti-Christian persecution and harassment in India, crimes against Christians in India increased 60 percent between 2016 and 2019. The majority of these incidents have happened in Uttar Pradesh.

Several states in India have adopted stringent anti-conversion laws that seek to prevent any person from converting or attempting to convert, either directly or otherwise, another person through “forcible” or “fraudulent” means, or by “allurement” or “inducement.”

However, such laws are often used by extremists as an excuse to disrupt church services and harass Christians.

In April, Christians in southern India’s Tamil Nadu state were arrested on false charges of “forcible conversion” while providing food and other aid to the poor. That same month, a Christian in India’s northeastern state of Odisha was severely beaten by a mob for holding a Christian prayer gathering in his home.

In March, Christians in India’s Uttar Pradesh state were falsely accused of forcefully converting Hindus to Christianity. As a result, they were brutally beaten by a drunken police officer who then ordered them to pose like Christ on the cross.

In February, nine Christians were beaten by the police after being accused of “forceful conversion” in the town of Sathankulam, Thoothukudi District, in India’s Tamil Nadu state.