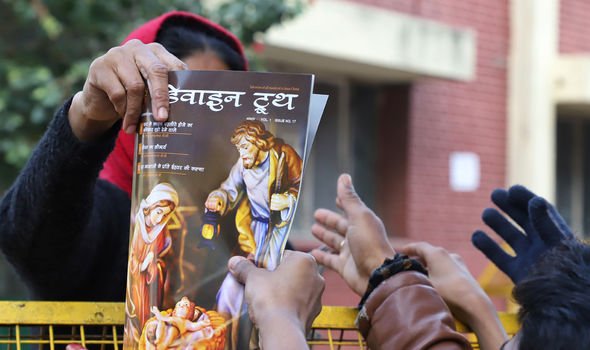 Christianity crackdown:Nine pastors beaten by police in India for spreading message of God

Across four days they were scheduled to distribute Christian literature and spread the message of the Bible.

It has been alleged the men were stopped by a member of the Hindu nationalist Bharatiya Janata Party, Ponniah, who seized the texts and accused the men of converting people by force.

He then alerted local authorities to the presence of the men.

Christian Solidarity Worldwide reported the men were then severely beaten by police.

Officers apparently took a bamboo baton to one member of the group, Pastor Barnabas, who sustained injuries to his back and legs.

The pastors were there to give out Christian literature and talk about God (Image: Getty)

Ponniah, who had first reported the men, then registered a police report against the nine Christians.

He was supported by members of a local Hindu nationalist group.

The group was taken to prison, but released later following intervention by human rights activists.

It is reported that Pastor Barnabas is receiving treatment in a private hospital nearby.

Christian Solidarity Worldwide’s Chief Executive, Mervyn Thomas, said: “The failure of the police to conduct their duties in an impartial manner makes them complicit in ongoing violations of the right to freedom of religion or belief.