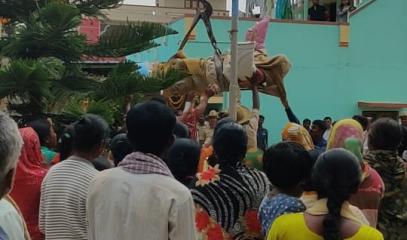 Archbishop Machado: Return the statue of Christ, taken from the Christian cemetery

The statue depicting Jesus was removed from Mahima Betta cemetery along with other statues. Local people appreciate the Christian community, but external groups accuse the faithful of forced conversions. The archbishop claims the freedom guaranteed by the Indian Constitution: government and local authorities inertia “unbelievable”.

A statue depicting Jesus was removed from the Mahima Betta cemetery in the village of Doddasagarahalli (Karnataka) yesterday. The archbishop of Bangalore, Peter Machado criticizes the local authorities for bowing to the claims of groups outside the village, who accuse the faithful of having made forced conversions. In reality, the people of the village confirmed that there is peace and friendship between Christians and other religious communities. We publish below the statement issued by the archbishop. In Karnataka there are more and more episodes of intolerance by Hindu fundamentalist groups. In recent months, radical groups demonstrated against another statue of Christ in Kanakapura.

Mahima Betta in Doddasagarahalli Village, Devanahalli Taluka, is the burial place of Christians of the area, situated on 4.5 acres of land, allotted by the Government of Karnataka for burial. This place was graced with 12 feet Statue of Lord Jesus Christ and other smaller statues. During the weeks before Good Friday and Easter, the Christians have prayers and devotions called the Way of the Cross to meditate on the sufferings and death of Jesus Christ, and also conduct reconciliation prayers etc. These practices have been going on for the last 30 to 40 years without any difficulty. There is absolutely no problem from local people to our burials, nor our prayers and devotions on the hill. While the Christians attend these prayers and devotions, the others are not forbidden to visit this place. Since about a week, some people from outside have been creating tensions by spreading wrong rumors that the place is used for conversion, which is completely far from the truth.

At the public meeting that was held in the presence of the Tahashildar and Police Officials, the local villagers have publicly said that the presence of Christians and their prayers are absolutely no problem for them and, this being the case, why should some outsiders come and disturb the harmony of the village.

It is very sad, unfortunate and regrettable that the police, bowing to the pressure of a few outsiders, have forcefully removed the statue of Lord Jesus. It is a blow to the communal harmony of the people in our villages and also violation of the religious freedom guaranteed to us by the Indian Constitution. If there is an instance of forceful conversion, let the Government investigate and take action. But it will not bring credit to the Government and to the local authorities to unnecessarily interfere in the religious tenets and practices of Christians by yielding to the pressure of some groups.

As everyone is quite aware that Christians are peace loving people, who obey the rules of the country. And they render their selfless service to the nation in the best possible ways, irrespective of caste, color or religion. The Christians of Bangalore consider the forceful removal of the statue of Lord Jesus at our legally allotted burial ground at Doddasagarahalli as unacceptable and are greatly shocked and we condemn this high –handed action of the local authorities. The Christians want the Existing Statue of Jesus Christ that was unceremoniously removed to be reinstalled immediately. We firmly believe that the state government will instruct the local authorities to do this redressal act immediately. We request the authorities to take action against the perpetrators of such acts that have pained the community.

As we are in the Holy Season of Lent, we pray for those who have done this discretion deed at Mahima Betta in Doddasagarahalli with the same word of Jesus Christ, who prayed from the Cross: “Father, forgive them, for they do not know what they are doing,”