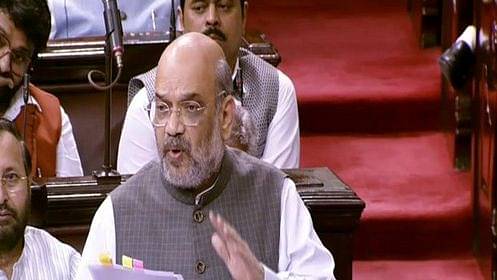 No documents mandatory for NPR, no one will be marked doubtful, said Amit Shah. However, the gazette notification is a clear giveaway,

Amid concerns expressed by Opposition parties in Parliament and anti-CAA/NRC protesters on the streets about the National Population Register (NPR), Union Home Minister Amit Shah said in Rajya Sabha that no documents would be required to be submitted during the exercise while saying that no one would be marked “doubtful”.

However, the “population register” gazette notification by Shah’s own ministry mentions the NPR as the first step towards preparing the NRIC. This is what the Sub-Rule (5) of Rule 3 of the 2003 Rules says: “The Local Register of Indian citizens shall contain details of persons after due verification made from the population register.”

This is the first step towards NRIC as sub-rule (5) says this would be prepared “after due verification” of the population register.

Sub-rule (4) of Rule 4 of the 2003 rules makes it very clear what will happen during this verification and scrutiny process: “During the verification process, particulars of such individuals, whose citizenship is doubtful, shall be entered by the local registrar with the appropriate remark in the population register for further inquiry and in case of doubtful citizenship, the individual or the family shall be informed in a specified Pro-forma immediately after the verification process is over.”

Sub-rule (5) of Rule 4 says “doubtful citizens” would be heard by the sub-district or Taluk Registrar of citizen registration, before a final decision is taken to include or to exclude them in the NRIC, but does not specify which documents would be required for this or the process to be followed.

So, Amit Shah should ask the gazette notification to be withdrawn and the rules of 2003 NPR changed. Only then, can someone believe him.

“I am again repeating that no documents will be needed for National Population Register (NPR). All the information asked is optional. Nobody has to fear from the process of NPR. There will be no ‘D’ (doubtful) category”, said Amit Shah while speaking in the Rajya Sabha during a debate on the riots in northeast Delhi, in direct contradiction of the contents of his ministry’s gazette notification.

“You can give whatever information you have and leave the other questions blank”, Shah added.

The Opposition was not satisfied over Shah’s NPR clarification, “It is not correct of the Home Minister saying they will not be asking for these documents, what is the use of this exercise then,” Congress leader Kapil Sibal asked.

On concerns over Citizenship Amendment Act (CAA), which led to nationwide protest, Amit Shah said the legislation would not take away anyone’s citizenship.

“I reiterate to my Muslim brothers and sisters that false propaganda is being spread on the issue of the Citizenship Amendment Act (CAA). This Act is not to take anyone’s citizenship but to give citizenship,” said Shah.

The NPR has been described as the first step towards the countrywide implementation of NRC. At least that’s what Shah’s ministry’s gazette notification shows.