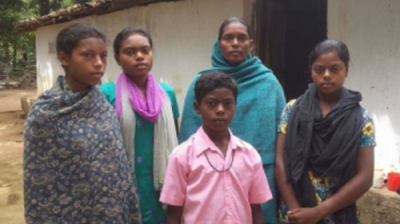 One Christian family’s story of unending persecution in India

For many westerners, India is an exotic travel destination, offering colorful cultural sites and warm-hearted hospitable people. However, thanks to the new Hindu nationalist leadership of the Bharatiya Janata Party (BJP), today’s India is increasingly marred by religious conflict and Christian persecution. The Purty family’s double tragedy serves as a sad example of this. And for some Indian Christians, their story is not so unusual.

Chamu Hassa Purty was a Christian pastor from Sandih village in Jharkhand State. Late one night in October 2015, he was asked to pray for a sick child. He rushed to the family’s home, prayed for the boy and helped the parents admit him to a local hospital.

Shortly after Pastor Purty returned to his own home, eight armed men forced their way into his house. He and his wife urgently warned their daughters, Sharon and Neelam, to immediately leave the house through a back entrance.

In an interview with Morning Star News, Sharon recalled, “As we were about to move, two of them held us and brought us back to the front room. They fired at my father many times…”

After the murder, the Purty family left their village and rarely returned. But recently, because of the coronavirus, it was necessary that they be reunited in their home.

And very soon thereafter, on April 16, anti-Christian terrorists once again appeared at the Purty house. Sharon and her younger brother answered the door and found themselves confronted by two gunmen.

“Is this the house of the pastor who was killed?” one of the intruders demanded.

Sharon stared at him as he ranted, “That pastor was killed but you didn’t learn your lesson. You’re still assembling in large numbers for Christian prayers. And where’s the woman who’s working as a spy?”

“There are no spies here…”

At that moment Neelam, hearing angry voices, entered the room. The gunman shouted, “She’s the one! She’s the spy!” He aimed his gun and pulled the trigger.

“Our father was shot to death in that same room,” Sharon Purty said later. “We cried for help as the two gunmen jumped on a motorbike and fled.”

Neelam Purty sustained serious injuries and was bleeding heavily. She was rushed to a hospital, where it was determined that a bullet was embedded in her thigh and her thighbone was shattered. Only after major surgery was she able to begin her painful recovery.

The police were notified. Evidence was recorded. But it should come as no surprise that there have been no reports of the gunmen being apprehended.

Attacks like those against the Purty family are on the rise in India due to a dangerous ideology gaining steam in the world’s largest democracy—Hindu nationalism. It asserts that India is a nation for Hindus, marginalizing Christians and other minorities.

This movement often inspires mob attacks against Christians. Such attacks, when committed by Hindus, are rarely rebuked by the present Indian government, and the legal system often fails to bring perpetrators of mob violence to justice.

In one instance earlier this year, an Indian pastor was dragged out of his church mid-service by a mob of Hindu nationalists and beaten for hours. Yet when the police arrived, they charged the pastor with violating a blasphemy law rather than charge the radicals for their violent assault.

Even Indian laws pose a threat to minorities, though according to the constitution, India is a secular country. Yet, anti-conversion laws remain on the books in several Indian states. These laws are intended to prevent forced conversions. In reality, they restrict the right to change one’s faith and discourage conversion away from Hinduism.

Some Hindu nationalist leaders are deeply paranoid about Hindus converting to Christianity or other religions. One former member of parliament and member of the BJP party called Christian missionaries “a threat to the unity of the country.”

Inflammatory rhetoric from national leaders, a growing exclusionary movement that ostracizes religious minorities, and draconian blasphemy and anti-conversion laws form a perfect storm for the persecution of Christians in India.

India is the world’s largest democracy and a strategic partner of the United States, so it is disappointing its government is failing to protect the fundamental human right to freedom of religion. This makes advocating for religious freedom in India a sensitive subject for some. But the United States has prioritized religious freedom in our foreign policy and must urge all governments around the world—whether friend or foe—to protect it. The United States has an obligation to speak up on behalf of religious minorities in India, even if it ruffles the feathers of our ally.