top
Home•News •In Jharkhand, a Mockery of ‘Right to Food’ as Lockdown Relief Measures Fail to Deliver 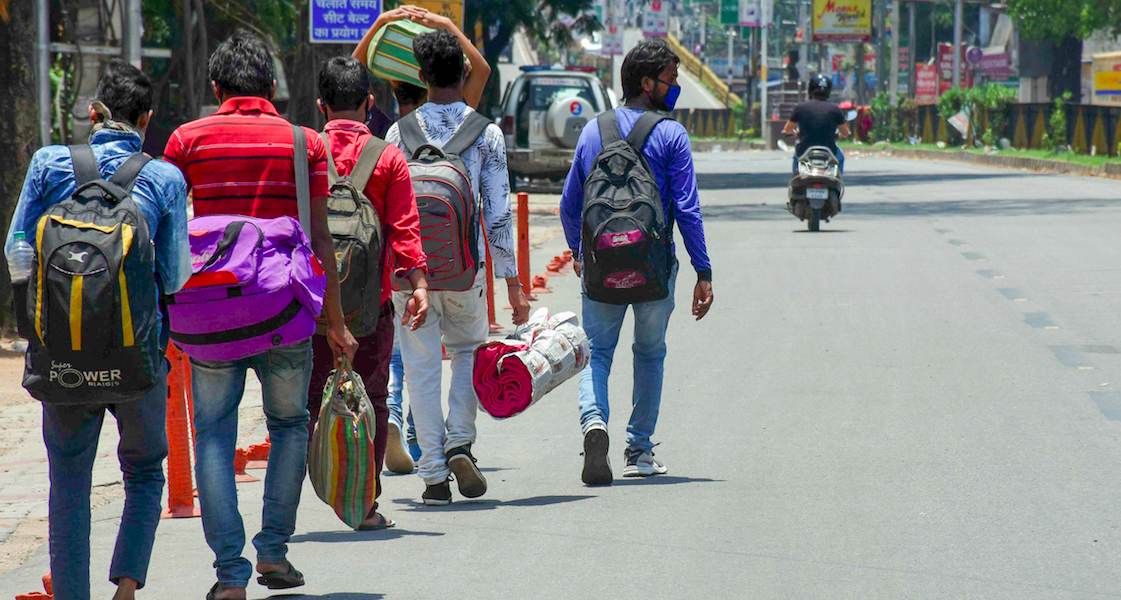 In Jharkhand, a Mockery of ‘Right to Food’ as Lockdown Relief Measures Fail to Deliver

Corruption and inadequacy of implementation has meant that some of the most vulnerable people have gone hungry since the lockdown.

“My wife died without eating anything,” he says.

Somaria Devi’s demise, on April 4, is the third starvation death in the state in April alone.

Her family had not had anything to eat for three days before her death. There was nothing in the house.

According to Census 2011, about 40% of Garhwa district’s population comprises people belonging to the Scheduled Castes (SC) and Scheduled Tribes (ST). Of them, 8,611 families are categorised under the Particularly Vulnerable Tribal Groups (PVTG) who are one of the most marginalised social groups in the state.

In addition to Garhwa, at least three more hunger-related deaths were reported from across the state in the lockdown period – differently-abled Meena Marandi in the Gomaria block of Bokaro district and Upasi Devi from the Gola block of the Ramgarh district. None of these families had a ration card.

Also read: Six Charts Show That India Needs to (and Can Afford to) Universalise PDS

The worsening hunger situation is not limited to a few families only. In socio-economically weaker groups like Particularly Vulnerable Tribal Groups, Dalits, Adivasis, daily-wage workers, and nomads, the hunger crisis is deepening.

This is illustrated by the instance where women attempted to lift food grain from a truck in chief minister Hemant Soren’s own constituency of Dumka. Dozens of women in Shikaripada gathered on the road on April 21 and tried to take food from a truck. The women said that they had lost jobs and their children were hungry. There had been no help from the government.

Despite the Centre’s and state government’s announcements regarding ration since the lockdown began, the burgeoning situation of starvation in the last month reveals the poor implementation of even these grossly inadequate relief measures.

At the beginning of the lockdown, on March 26, the Jharkhand government announced two major ration-related measures –

1) that food grain entitlements for the months of April and May would be given together in April, and

2) eligible families whose online application for a ration card is pending would be given 10 kilograms of rations.

Additionally, a few days later, the Centre also announced the ‘PM Garib Kalyan Package’ –  under this, every person registered under the Public Distribution System (PDS) will get ‘double ration’ (10 kilograms instead of 5 kilograms of rice) from April to June, and the additional 5 kilograms will be free of cost.

In Jharkhand, at the panchayat level, another food security net is the ‘Contingency Food Fund’ set up in 2018 after a spate of starvation deaths. Each gram panchayat has been given a fund of Rs 10,000 which is to be used to provide food grains to families in dire situations.

Apart from this, the Jharkhand government decided to expand the Dal Bhat kendras a few days after the lockdown and to establish community kitchens at police stations and at the panchayat level.

Implementation on the ground

The significant gap between relief announcements and their implementation is extremely worrying. In order to understand the situation of relief schemes in the state, a survey was conducted in 50 blocks across 19 districts in the first week of April, by the ‘Right to Food Campaign, Jharkhand’.

The survey found that until April 10, card holders in only 15 out of 50 blocks had received double rations. This was a good step. However, in at least five blocks, even the ration for March was yet to be delivered.

The survey also found that even though Daal Bhat Kendras (DBK) had been made functional in 42 of 50 blocks in a very short time, most of them were under-utilised and very few people were making use of the facility.

People were simply not able to travel to the DBK due to the lockdown restrictions. Administration also needed to advertise and open more DBKs near slums and remote places.

According to government data, ration card applications of about seven lakh families are pending. However, most of them have not received the stipulated ration even a month and half after the announcement.

On April 27, in response to a public interest litigation filed on insufficient relief measures, the Soren government said that only 35% of the seven lakh families had been given the 10 kilograms of food grains.

The Jharkhand government, astoundingly, allocated funds for this scheme an entire three weeks after its announcement.

Additionally, there was no clarity in the government’s order on where the families would receive the grains from. Many families kept making rounds to the panchayat office and ration shops to no avail.

Even PDS cardholders have not had a smooth ride. The lockdown has further exposed the existing problems in the PDS of the state.

At least 40 lakh eligible people are still out of the coverage of the PDS in the state. As per the national food security act (NFSA), implemented in the state in 2015, about 80% of the total population– 86% in rural areas and 60% in urban – was to be covered by the PDS. But this was based on the 2011 Census. Based on prediction of the population growth in the last 10 years, a large proportion of eligible population is excluded from the PDS.

In addition to this, quantity fraud continues to affect the PDS. Most of the ration dealers across the state take cuts of the allocated amount of ration from the beneficiary. This is not a new phenomenon in the state.

Also read: Amid Lockdown, UP Centres Procuring Grains From Fewer than 2 Farmers a Day on Average

In August 2019, a survey of 143 ration card holders in the Bishunpura block of Garhwa district by Dehan Organisation, revealed that ration dealers “cut” about one to four kgs of food grains per month from 89% of the card holders and ration of at least two months was siphoned off by the dealer in a single year.

Under the state government’s ‘Dakiya Yojana,’ PVTG families are to be home-delivered 35 kgs of ration in sealed packets. The responsibility for this lies with the block supply officer (BSO). However, in a village of the Sadar block in Palamu district, 35 PVTG families were given only 30 kgs of ration for the months of April and May.

This is less than the stipulated amount of ration for one month, let alone anywhere close to the amount they are entitled to for two months (as announced in the relief measures). Additionally, an entry was made for the month of June in the beneficiaries’ ration cards without even distributing grains for that month. Anchhu Parayiha, a resident of the village, had died a few years ago but ration was still being lifted till April 2020 in his name.

One of the reasons for the continuing quantity fraud is the lack of administrative action against ration dealers and officials responsible for the corruption.

According to the Dehan Organisation’s survey, four dealers had been involved in a similar scam, but the Bishunpura block development officer did not take any action even after receiving a report and complaint letter.

However, some action has been taken by the government during the lockdown. In the first week of April 2020 a dealer Chameli Group was caught selling the grains in the open market. After this, an FIR was registered and the shop was sealed.

In Satbarwa block of Palamu district, action was taken against four corrupt dealers and two of them were sent to jail.

Also read: India Needs a Big-Bang Stimulus, Not Sermons on How There Is No Free Lunch

The lockdown will have a longterm impact on the lives of the poor. Lakhs of families will depend on government welfare schemes (especially public distribution system, Anganwadi, MGNREGA and other cash transfer schemes) for their survival.

In this situation, longterm relief plans are also needed along with emergency assistance. There is a need to universalise the scope of public distribution system in rural areas and urban settlements. Also, all cardholders should be given double ration for at least next six months. Community kitchen should be established in anganwadis and schools in every village.

To monitor ration distribution, government officials, police or other non-government monitoring committee should be appointed at PDS shops so that people get their full entitlement.

Special grievance redressal systems should be implemented so that grievances can be resolved quickly and strict action can be taken against corrupt dealers and government officials.

With inputs from Siraj Dutta and Vipul Paikra.

Vivek Kumar is associated with Right to Food Campaign, Jharkhand, and works on food security issues in the state.