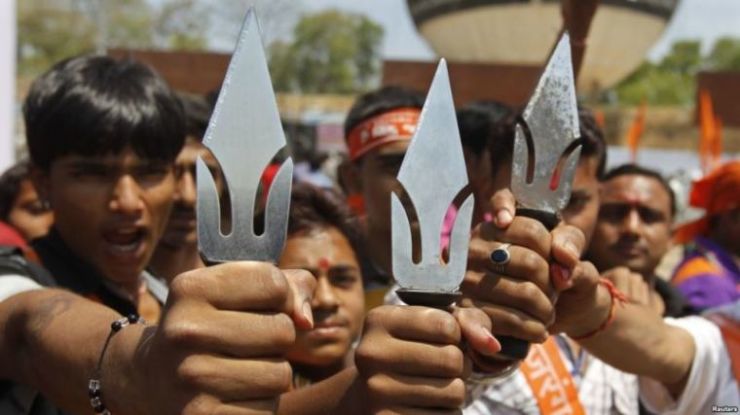 Hindu nationalists have falsely accused Christian missionaries of being behind the lynching of two Hindu priests, placing the country’s already-persecuted Christian minority further at risk.

UCA News reports that after two Hindu priests and their driver were murdered by a mob in Gadchindhali village in Maharashtra’s Palghar district in April, Christians were quickly blamed for the killing despite no clear evidence that any believers were involved.

The three individuals were on their way from Mumbai’s Kandivili to Silvassa to attend a funeral when they were stopped by a vigilante group that was set up by locals to patrol during the night, the Times of India reported.

After questioning the men they suspected of being kidnappers or robbers, the mob pelted stones at them and later beat them with sticks. Though police attempted to intervene, the mob killed the three travelers. The police have detained over 100 people and nine minors in connection with the lynching.

Days later, Rakesh Sinha, a member of parliament from the Hindu nationalist Bharatiya Janata Party and a senior spokesperson for the Hindu extremist Rashtriya Swayamsevak Sangh, claimed on national television that Christian missionaries and the Communist Party of India were behind the murders, UCA News reports.

Without providing any evidence for his allegation, Sinha claimed Hindus would not attack priests unless caught in immoral acts and a mob of some 200 people could not come together late at night without being organized by a leader.

Insisting it was a planned murder involving Christians and communists, Sinha said: “A probe will prove it. But I’m making an allegation.”

According to The Wire, videos of the incident also began circulating on social media, with some insinuating it was a communally-motivated crime committed by members of either the Christian or Muslim communities.

An image of the two deceased men was also shared on social media with a graphic that accuses “the goons of Christian missionaries” for the attack.

However, the state’s Chief Minister Uddhav Thackeray repeatedly clarified that the killings had no sectarian angle.

Maharashtra Home Minister Anil Deshmukh also took to Twitter to quell rumors, releasing a list of names of those arrested to show that attackers and victims were from the same religious background.

“The list of the 101 arrested in the #Palghar incident. Especially sharing for those who were trying to make this a communal issue,” he wrote in an April 22 tweet. He also tweeted, “Palghar mob lynching is a grotesque incident which happened due to rumors on social media about child kidnappers & thieves prowling in the area. A high-level inquiry is going on & meanwhile people are requested not to fall for rumours & verify the facts from trusted sources.”

Vijayesh Lal, general secretary of the Evangelical Fellowship of India, told Morning Star News that linking Christians to the attack “looks like a deliberate attempt to malign the Christian community and can increase attacks on Christians not just in Palghar district but also elsewhere.”

“Rumors spread through social media, and vicious attacks by cow vigilantes have resulted in several incidents of lynching throughout India in the recent years, and we condemn each and every one of them. The Christian community has lost at least four of our own to these senseless killings; the Muslim community has lost many more,” he said.

Archbishop Felix Anthony Machado of Vasai, which covers the area where the murder happened, told UCA News the allegations are “part of a conspiracy to defame Christians” and an “attempt to communalize” the incident at a time when the country is “fighting the deadly global pandemic.”

“There are no Christians in the area where the trio were killed,” he said, adding that while Christians have been facing such accusations for a long time, “the truth will prevail.”

Prabhakar Tirkey, national president of Rashtriya Isai Mahasangh, an ecumenical forum of Christians, said the allegation is part of “a well-orchestrated attempt to whip up communal frenzy in the country.”

“If not nipped in the bud, it will kill more people than the Covid-19 infection,” he warned.

According to Christian leaders, the Bharatiya Janata Party, led by Narendra Modi, and supporting Hindu groups have regularly blamed Christians for violating laws in efforts to keep villagers and tribal people away from missionaries.

EFI’s Lal told Morning Star News that the attempts to connect India’s already-persecuted Christians to the killings could have dangerous consequences.

“Last year there were at least three incidents of attacks on Christian in the district in the months of February, May and November respectively,” Lal said. “Palghar has been a sensitive district where churches, fellowships and Christians have been targeted by religious radicals belonging to various right-wing fundamentalists groups, and some of those attacks have been gruesome and violent in nature. I can personally recollect attacks from as long back as January 2013.”

“It is an unfortunate act that should not have taken place and shows how rumors can take lives,” Lal said. “I hope that this unfortunate killing of the Hindu sadhus is not used by people who spread hate to further their agenda, to target Christians in this tribal belt as well. We appeal to the state government of Maharashtra to let the rule of law prevail and to bring the guilty to justice, and at the same time ensure security of the minority communities in the state.”

India is ranked at No. 10 on Open Doors USA’s 2020 World Watch List of the countries where it’s most difficult to be a Christian. Additionally, the U.S. Commission on International Religious Freedom on April 28 urged the U.S. State Department to add India as a “Country of Particular Concern” to its list of nations with poor records of protecting religious freedom.