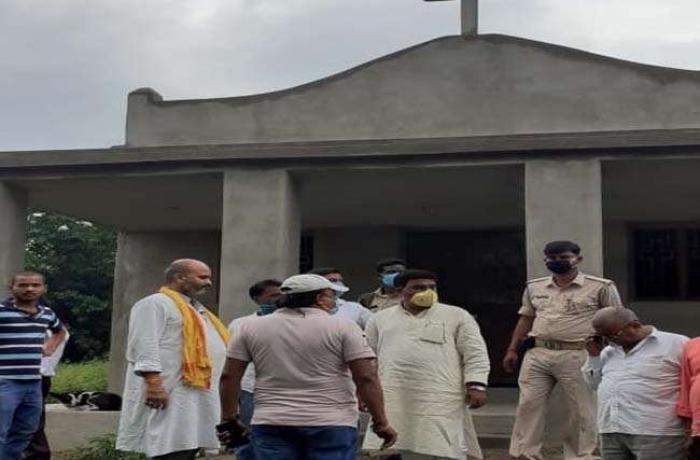 A mob damaged the building still under construction and destroyed a cross. Police cordoned off the area and arrested the two Christian teachers. Sajan K George: “False accusations, intimidation of Christians for political reasons”.

Belagadia (AsiaNews) – A Pentecostal church was vandalized by Hindu radicals after two Christian teachers were accused of proselytizing. The incident occurred on June 22 in the Dhanbad (Jharkhand) district. The mob damaged the building which is still under construction and destroyed a cross. The police cordoned off the area, blocking public access to it.

The church is being built on land that has been leased for 30 years, and has a congregation of 16 families mainly from Belagadia. Kaina Pansal and Sushant Pradhan teach in the premises and anti-Christian militants along with local politicians accuse them of having converted some local families.

Police arrested and interrogated the two Christian teachers on charges of forced conversion, and the district administration sent a report to the government.

Religious proselytism is banned by law in Jharkhand; those found guilty can be sentenced up to three years in prison and 50 thousand rupees (588 euros) in fines.

In the East Indian state, if someone wants to convert to another religion, they must first seek authorization from the district authority.

President of the Global Council of Indian Christians, Sajan K George maintains that the charges against Pansal and Pradhan are false: “These anti-conversion laws are tools for intimidating, mistreating and frightening the tiny Christian community. They are used by local politicians and extremists for simple political reasons.”

George condemns the attack on the Belagadia church, an oasis of prayer and peace that law enforcement agencies “have turned into a police station.”