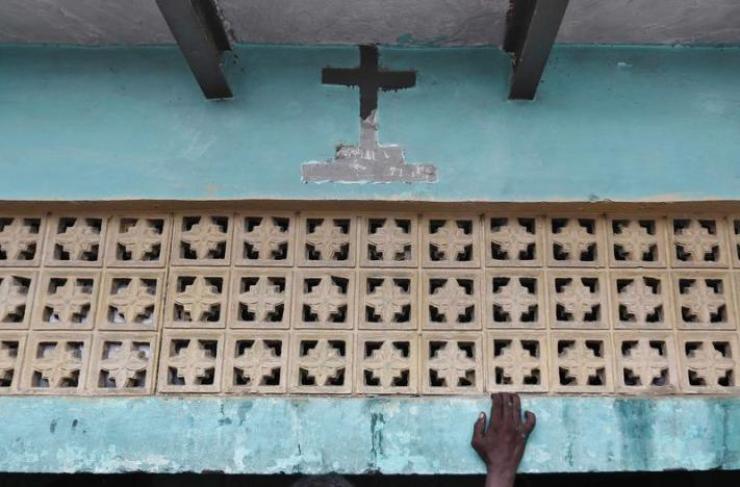 Christian families in Jharkhand hold on to faith despite persecution

A man climbs down after partially chipping out the cross from the entrance of his house, after taking part in a religion conversion ceremony from Christianity to Hinduism, at Hasayan town in Uttar Pradesh August 29, 2014. Reuters/Adnan Abidi

Two incidents where Christians in Jharkhand were harassed and persecuted by radical Hindu nationalists last month points at the increasing number of violence against Christians in the country even during the pandemic.

On May 31, Pastor Jaiwant Tirkey from New Hulhnda village was attacked by radical Hindus who justified the assault by accusing the Christian leader of violating the COVID-19 lockdown.

Pastor Tirkey is an independant pastor and was assaulted while distributing COVID-19 food relief.

“We opened the church because we wanted to use the premises to prepare meals for migrant workers,” Pastor Tirkey told International Christian Concern (ICC). “I was there along with a few other volunteers preparing and serving breakfast when all of a sudden, a man with an iron rod kicked in the gate.”

“He was shouting and attacked me. I narrowly escaped a fatal blow to my head which would have landed between my upper jaw and ear,” the pastor said.

In another incident on May 9, Tirpan Oraon, who converted to Christianity in 2005, was attacked by his own brother after he refused to contribute money to a local Hindu festival.

Oraon’s hip was severely injured in the attack. “I have been struggling with pain for the last two months,” he told ICC. “I cannot get up on my own, sit, or even get to the toilet. The pain is increasing day by day.”

Oraon and his family have been facing increasing levels of persecution from the time they converted to Christianity.

According to Oraon’s son Parameswar, the family is kept away from any social events in their village. They were threatened numerous times and asked to recant their faith in Jesus.

“The village leaders also told us that by giving up the village gods, we don’t have a right to own the land that we farm,” Parameswar told ICC. “It has been a tough journey for the past fifteen years. This recent attack on my father is another attempt to pressure us into recanting our faith.”

Despite persecution, Oraon’s family never gave up on their faith.

“Although there are difficult circumstances created for us, we have inner peace and joy following Jesus. We will never look back and regret our decision to follow Jesus,” Parameswar told ICC.