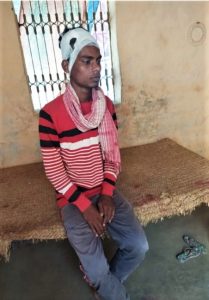 Pastor Ramnivas Kumar had been attacked before, but in the latest instance he was stunned that police in eastern India arrested his bleeding guests based on transparently false accusations that they were robbers, he said.

Christians Avinash Kumar and Rambali Ram were visiting Pastor Kumar’s home in Ranjitpur village, Bihar state on July 13 with two Hindu friends who had met them on the way from their fields in Sitamarhi District and requested the pastor pray for them, the church leader said.

The two Hindus had told their two Christian friends they wanted the pastor to tell them the story of Jesus and to pray for them, he said. As he and the four guests chatted over tea, Pastor Kumar asked if recent flooding had affected their harvests, explained the gospel to the Hindus and began praying for them, he said.

“As I was praying, we heard the neighbors shouting at us from the main door,” Pastor Kumar told Morning Star News. “They were hurling abuses at me, accusing me of accepting a foreign faith and following a foreign God.”

He and the two Christian guests went out to ask why they had intruded onto his property and were using filthy language against him and his faith.

“They started beating us with steel rods and wooden sticks. Both the brothers received blows on their heads, and they were soon bleeding profusely,” the pastor said. “I was also hit and could not control the mob from striking the four guests who were visiting us.”

He called police, and officers from the Punaura police station arrived and asked why the mob had barged onto his property and beat them with steel rods and sticks, Pastor Kumar said.

“The assailants very tactfully flipped the matter and told the police that they were worried that four persons forced their way into Ramnivas Kumar’s house, and that they had come in time to rescue him from daylight robbery,” he told Morning Star News. “The police listened to their version but did not pay heed to us. Our pleas fell on deaf ears.”

The officers told him the four guests were “outsiders, and they could even be killed if they entered someone’s house to commit robbery,” and they arrested the two Christian visitors, Pastor Kumar said.

A representative of legal advocacy group Alliance Defending Freedom India called the station chief and higher police officials in Bihar that night, urging them to take action against the assailants and not charge the innocent Christians, he said. As a result, the Christians were released early the next morning without charges.

Police warned the assailants not to disturb the pastor or his friends, Pastor Kumar said, and with ADF India’s help he petitioned the superintendent of police and other higher police officials, as well as the Human Rights Commission, for help. Authorities informed him that the case would be heard before the sub-divisional officer on Sept. 13, he said.

Pastor Kumar, who has an artificial leg after an amputation due to a train accident when he was 1 year old, said he has been attacked five times before, three violently, during five years of ministry in impoverished Bihar state.

Five village men in contact with the Hindu nationalist Rashtriya Swayam Sevaksangh (RSS) have instigated residents against him, saying he has defiled the village by accepting Christianity and “attempting to spread a foreign faith,” he said.

“God knows that I cannot prevent them physically from attacking me,” Pastor Kumar said. “After another attack in November 2019 at a Christian’s house where I was praying, I wrote to higher officials, but no action was taken against the assailants.”

Villagers accuse him of bringing a foreign faith that encourages people to eat cow and oxen meat, forbidden in Hinduism, he said. They told his parents he had converted to Islam and had started eating beef, he added.

“My parents bitterly disliked this, and they started attacking me,” he said.

He had left his native Ranjitpur for Gujarat state in 2011 and was working as a clerk at a college, and nights as a garment factory supervisor, when his spiritual restlessness led him to type into his mobile browser, “Who is God?”

He searched for churches and met with a pastor, though initially he was angry that the church leader wore a T-shirt instead of priestly robes.

“I was very angry and told him that I have no business with you – call the church father, I will talk only with him,” he said.

The pastor smiled, asked him to take a seat and began sharing about Christ.

“He gave me a copy of the New Testament,” he said. “I started reading it, and soon I requested him to give me the full Bible. Then I begged him to baptize me.”

Soon he was admitted to a Bible college, graduating with a vision to return to Bihar among his own people, he said. He returned to Ranjitpur in 2015.

“Since the day I came to Christ, I had a longing to get back to my village and preach the gospel among my people,” he said. “All these days I had kept it a secret from my family, and also I took my wife to Gujarat and shared about Christ with her. I am well aware that preaching the gospel is not an easy task – my own family cast me out when they got to know that I came to Christ after I returned home with my wife.”

He faced opposition from the Aghora, a small branch of Saivism, which regards the Hindu god Shiva as the supreme being.

“In Bihar, particularly men of my age smear ash all over their body, do Ganja [cannabis] and roam naked as Aghora in the streets and temples,” he said. “They turn violent and can even kill a person in anger.”

When he went to villages to screen movies about Christ, the Aghora would throw water at or tear down the screen, he said.

“One of the Aghora Babas who has strong links with the BJP politicians and RSS lives very close to my home and tries to intercept me from moving freely on the road,” Pastor Kumar said. “He would chew his teeth and start laughing like a ghost when he sees me. He is never in his senses because of the drugs.”

India is ranked 10th on Christian support organization Open Doors’ 2019 World Watch List of the countries where it is most difficult to be a Christian. The country was 31st in 2013, but its position has been worse each year since Narendra Modi of the Bharatiya Janata Party came to power in 2014.