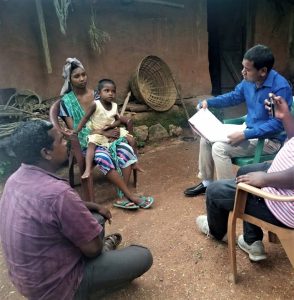 When Kande Munda heard a knock on his door one night last month, the Christian father of two knew it was likely the same thugs and their colleagues in his area of Jharkhand, India who had harassed him for nearly four years.

They were particularly upset that Munda had reported them to police for a 2018 assault on his mother-in-law. The assailants, followers of tribal Adivasi religion, had opposed her conversion to Christianity by labelling her Christian prayers as “witchcraft” and gang-raping her.

Munda and his family were already in bed after a hard day of work on the night of June 7 when they heard the knock on the door. Munda told his wife not to answer it.

“He was suspicious that they must have come for him,” his wife, Bindi Munda, told Morning Star News.

Three men forced the door open and entered, while four or five remained outside, she said. Darkness obscured their faces.

“One of them pointed a gun at my husband and told the other two men that they should first rape me and then kill my husband,” Munda said.

Their children, ages 1 and 3, were asleep. The armed assailants seized her husband by the neck as he knelt and pleaded with them not to kill him, she said.

“I have done nothing wrong – please don’t kill me,” he cried repeatedly, according to his wife, who picked up their children, holding one in each arm, and fled into the wilderness. She hid there briefly before running into the village screaming for someone to save her husband.

“But by the time I had returned to our shanty with some neighbors, he was not there,” she said. “I went about half a mile on foot to a believer’s home to get their help to search for my husband.”

That night Kande Munda’s youngest brother, returning to Bari village on a motorbike, found his corpse in a pool of blood under a tree by the side of the road to Latardih village. The mutilated body was barely recognizable.

“He suspected that the body was that of his brother,” the wife of the deceased told Morning Star News. “He rushed to our shanty looking for us, and as he could not find us there, he called on my husband’s phone. I picked up the phone, and he told me that there was a corpse lying by the road, and it looked like that of my husband.”

It was the second killing of a Christian for his faith in India last month. On the night of June 4 in Odisha state, followers of tribal religion abducted 16-year-old Sambaru Madkami for his faith before stabbing and stoning him to death. In Uttar Pradesh state on May 28, villagers tried to kill pastor Dinesh Kumar in an ambush that left him unconscious.

Munda and his family previously practiced their traditional, animistic religion as tribal Adivasis. After he put his faith in Christ in 2017, his wife soon converted, and when her mother came for an extended visit in 2018, she too received Christ, Bindi Munda said.

After Adivasi villagers abducted her mother from their home, took her into the woods and gang-raped her, Kande Munda filed a police complaint, she said.

“The police investigated the matter and arrested some of the accused,” she said. “Since then, opposition against my husband and our Christian faith increased.”

Sanjay Sandil, a member of Siyon Church in the area, said the primary suspect remained at large. After police arrested some suspects, he said, one of Munda’s cousins continually harassed Munda with the help of some militant Maoist colleagues, pressuring him to withdraw the charges.

The cousin and Maoists issued an ultimatum about three months ago that Munda should drop the case or “face consequences,” Sandil said.

“Every time he would inform us about the harassment, we supported him as a church and stood by him,” Sandil told Morning Star News. “We always reached Bari village in the next couple of hours and ensured that the Maoist group did not lay hands on him or sister Bindi Munda.”

In May eight men surrounded their home, and Sandil and other Christians arrived to stand with the family, he said. Police also arrived and gave assurances that they would not let any of the accused go free, Sandil said.

The day of the attack (June 7), police had received word that the primary suspect was in Bari village and were searching for him, he said.

“They could not catch him, but in the night at around 8 p.m., the men unleashed the attack by forcefully entering his house,” Sandil said. “It is more likely that the same persons who gheraoed the house in May must have showed up at their shanty that night. Brother Philip Munda was brutally hacked to death with machetes. The marks can be seen clearly on the back of his body.”

On June 8, officers at the Saiko police station registered cases against the eight men under sections for kidnapping or abducting to murder (Section 364) and murder (Section 302) of the Indian Penal Code.

“The persons who abducted and murdered Kande Munda have absconded from the crime scene soon after they committed his murder,” Superintendent of Police Ashutosh Shekhar told Morning Star News. “The investigation and search for the accused are still underway. We have been able to list the names of suspects, and a few other names also had surfaced during the investigation. All the accused persons would be arrested very soon.”

Sandeep Oraon, Jharkhand legal aid coordinator for advocacy group Alliance Defending Freedom India, visited Munda’s family at their new location on June 24. He assured them of legal assistance in the matter and prayed with them.

Sandil recalled Munda as a noble soul – a selfless, skilled construction and field worker who would agree to work for half the normal wage for people who could not afford to pay more.

“He was providing for his family by working very hard,” Sandil said. “Now the small children do not have a father to provide and raise them.”

Bindi Munda has relocated with her children to another village, as the killers could come after her since she witnessed the abduction of her husband, he said.

“After Brother Philip Munda’s funeral service, the church members spent some time with sister Bindi, counselling her and telling her to remain strong in faith,” Sandil said. “She shared that her husband told her that he could be killed and asked her to bring up their children in a godly manner.”