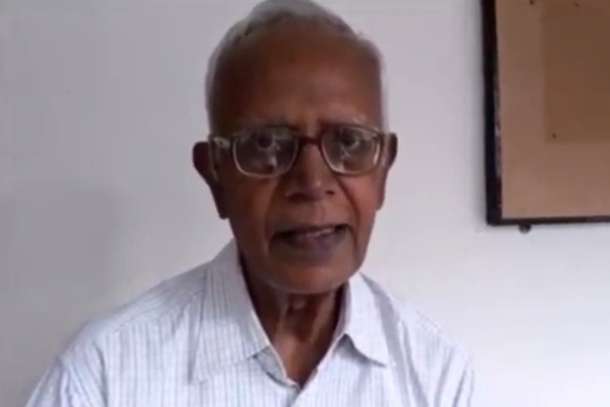 Why did Indian police arrest Jesuit over terror conspiracy?

A screengrab from the video where Father Stan Swamy explained why police wanted him in a conspiracy case.

Protests continue in several parts of India after Jesuit Father Stan Swamy, an 84-year social activist in Jharkhand state, was arrested on Oct. 8 on charges of having links with a banned Maoist terror group.

In a video posted hours before his arrest, Father Swamy said that the federal agency combating terror activities — the National Investigation Agency (NIA) — had interrogated him for 15 hours during a span of five days.”Now they want me to go to Mumbai, which I have said that I won’t go,” he said in the video, citing his advanced age and the pandemic as reasons for his preference to have further questioning through video conferencing.However, he was arrested and taken to Mumbai, the capital of Maharashtra state. A special NIA court in that city remanded him to judicial custody for 14 days on Oct. 9.His case is linked to the Bhima-Koregaon area in Maharashtra state, where a violent clash occurred on Jan. 1, 2018, in which one person was killed and several others injured. Following investigations, police alleged some nine activists, including Father Swamy, conspired to organize the violence and have links with the banned Maoists group.

“I have never been to Bhima-Koregaon for which I am being made an accused,” Father Swamy said in the video.”… what is happening to me is not something unique happening to me alone; it is a broader process taking place all over the country. We all are aware of how prominent intellectuals, lawyers, writers, poets, activists, student leaders are put in jail because they have expressed their dissent or raised questions about the ruling powers of India.”

He said he was part of the process and not a “silent spectator” and was “ready to pay the price whatever it be.”The NIA claims investigations established that the priest was actively involved in the activities of the Maoist group. It says he was in touch contact with the alleged conspirators of the violence — Sudhir Dhawale, Rona Wilson, Surendra Gadling, Arun Ferreira, Vernon Gonsalves, Hany Babu, Shoma Sen, Mahesh Raut, Varavara Rao, Sudha Bharadwaj, Gautam Navlakha and Anand Teltumbde.Father Swamy has often raised his voice against alleged police excesses in Jharkhand and what he describes as the government’s failure to properly implement the fifth schedule of the constitution in the easten state.

The fifth schedule stipulates that a Tribes Advisory Council composed solely of members from the tribal community advise governors of tribal-inhabited states on their well-being and development.Father Swamy has claimed that none of the governors — the discretionary heads of these councils — has ever reached out to tribal people to understand and work on their problems.He has also taken exception to how the Panchayats (Extension to Scheduled Areas) Act (PESA), 1996, has been “neatly ignored” and “deliberately … left unimplemented in all the nine states” with a tribal population.The law, according to him, was the first to recognize the fact that the tribal communities in India have had a rich social and cultural tradition of self-governance through the village forums called gram sabha.In 2017, he mobilized tribal people to fight for the rights granted to them under PESA, leading to the Pathalgadi movement, which claimed autonomy for tribal-dominated areas.Father Swamy and many others were booked for alleged sedition under the state’s erstwhile government run by the Bharatiya Janata Party (BJP). But the cases have been revoked under the current secular dispensation that came to power after defeating the BJP.The Jesuit priest has also been a vocal advocate for the release of undertrials. He says they have been unfairly lodged in jails and labeled Maoists.In 2010, he published a book about this, titled Jail Mein Band Qaidiyon ka Sach (The truth of undertrials).In the book, he states that the family income of 97 percent of the youths arrested was less than 5,000 rupees (some US$60) and they could not afford lawyers to represent them.He claimed that 98 percent of those arrested were falsely implicated and had no links to the Naxal movement.Father Swamy has also sought to represent those who are yet to get rights to land under the Forest Rights Act (FRA), 2006, which seeks to recognize forest-dwelling communities’ claim to land they have inhabited for generations.He wrote in 2018 that between 2006 and 2011, about three million applications for title deeds were made under the FRA all over the country, of which 1.1 million were approved and 1.4 million rejected, while 500,000 remain pending.In a September 2018 interview with Caravan magazine, he alleged that those who raised questions were being termed anti-national.”If you take up these issues, these are the things you have to face. The mahaul (current environment) in Jharkhand, adjoining states and the country is that you are anti-development if you raise questions and find facts. If you are anti-development, you are anti-government. If you are anti-government, you are anti-national. That is the logic being followed here,” he said.Father Swamy has appealed to Indian people to fight a worrying trend that undermines the nation’s fundamental principles of socialism, secularism and democracy.