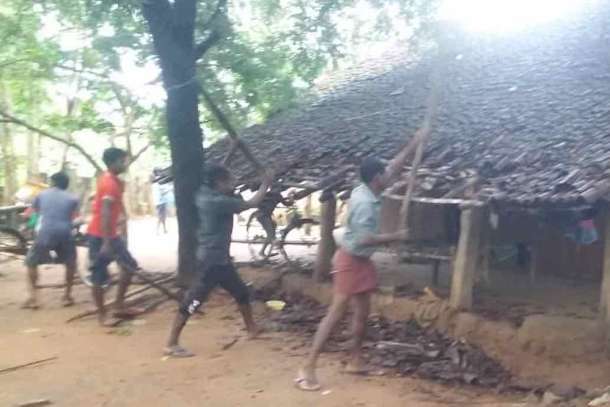 A group of non-Christian tribal people attack Christian homes in a village in Inda’s Chhattisgarh state on Sept. 23 after Christians refused to follow the traditional Sarna religion. (Photo supplied)

Christian leaders have urged the government in India’s Chhattisgarh state to act against those who attacked 16 Christian families and destroyed their houses for refusing to abandon their faith.

Even after a week, state police have not registered Christians’ complaint against the tribal group that attacked them on Sept. 22 and 23, said Pastor Moses Logan.

“Police refused to register a first information report and are forcing the persecuted to compromise with the perpetrators of the crime,” Pastor Logan told UCA News on Oct. 2.

“They also assaulted women and children, so many ran into the forest to save their lives,” the pastor said.

He said villagers suspected trouble when they noticed unusual movements and gatherings in the villages. They informed police about them three days before the attack. “But police took no action, no protection was given,” he said.

Crowds of men used wooden sticks and poles to partially destroy the thatched roofs and walls of mud houses. The attack came after Christians refused to join the rituals and prayers of the indigenous Sarna religion.

“The goons demolished the houses in front of the police and other district officials who did not stop them terrorizing even others who witnessed it,” Pastor Logan said.

Arun Pannalal, the ecumenical Chhattisgarh Christian Forum president, said they had arranged accommodation and food for at least 20 people who fled villages fearing for their lives.

“Unfortunately, the police have not accepted the complaints from the poor people who have been rendered homeless and forced to flee their own villages,” Pannalal told UCA News on Oct. 2.

The Christian leaders appealed to the government to accept the complaints of the persecuted Christians and to initiate action against the attackers and compensate villagers for their loss of houses and other articles.

Archbishop Victor Henry Thakur of Raipur said the government should make sure that the criminals are punished.

He said such attacks have happened during the 15-year long rule of the pro-Hindu Bharatiya Janata Party (BJP) in Chhattisgarh.

“It is unfortunate that these attacks continue even now” after an alliance of secular parties came to power in the 2018 state election ater defeating the BJP.

“If the government fails to initiate exemplary action against those behind the persecution of Christians, it will lead to lawlessness and chaos,” he said.

Archbishop Thakur also demanded adequate compensation for victims and protection for people to help them return to their homes.

Christian leaders say Chhattisgarh remains among the three worst states for Christians in India as they face hostility from right-wing Hindu groups opposed to Christianity.

Quoting from different reports, Pannalal said the state had recorded 39 incidents of persecution against Christians since January this year. It is the worst state for Christian persecution after Uttar Pradesh and Tamil Nadu, he said.