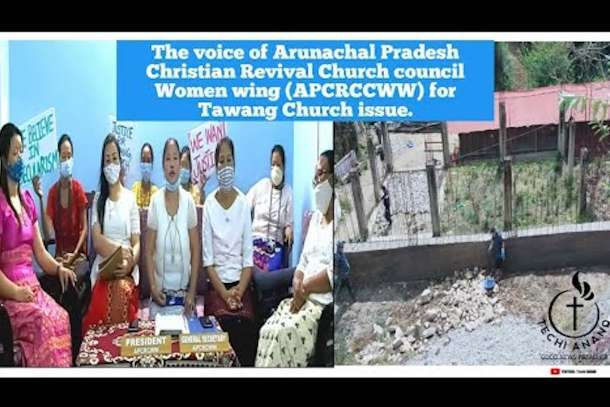 Christians angry over blocking of church construction in India

A Christian group in the Indian state of Arunachal Pradesh is mulling a protest after the state government prevented construction of a church because it says it was illegal.

“The present government says that the church is illegal as it is on public land, referring to the Supreme Court order that bars construction of religious structures in public places, but that is not the case here,” Father Felix Anthony, spokesman for the Catholic Church in northeastern India, told UCA News.

“People here who are for or against the construction of the church are not for disturbing the peace of the community that has been prevailing for years. People want the issues sorted out amicably. There is no question of disobeying the law written in the constitution.”

Police in Tawang on the India-China border on Oct. 6 arrested Joseph Singhi, a pastor of Tawang Christian Revival Church, on charges of constructing a church without any land allotment.

He was arrested after a complaint by the district Land Revenue and Survey officer but was released the same day. Police also detained and interrogated eight others associated with the church.

ACF claimed that the church was established in 1999 and had given several applications seeking land allotment. The papers were submitted to the government through the local administration since 2003, but the authorities never responded.

It was a makeshift church and the problem arose in 2015 when work started on the construction of a permanent structure.

However, Tai Ete, president of Arunachal Pradesh Christian Revival Church Council, said nobody objected when the church was set up in 1999.

“The problem started in 2015 when we started construction of the church. The government authorities said it was government land and we didn’t have the land allotment order,” Ete told media.

Ete said that in 2003 Gegong Apang, then chief minister, and the department concerned had no objection to the church. He claimed that the disputed site is “unused” and “rejected”.

“Is India not a secular country? The right to freedom of religion is enshrined in the constitution to enable its citizens to freely profess and practice their religious beliefs,” Ete said.

“We want the case to be resolved amicably. They are harassing us intentionally. All have the right to propagate their own religion.”

Arunachal Pradesh Christian Revival Church Council had earlier said Christians have no intention to disturb the way of life in Tawang, known for a 339-year-old Buddhist monastery.

ACF handed over a memorandum to Chief Minister Pema Khandu on Oct. 9 informing him about the blocking of the construction of a permanent structure where a temporary church has existed since 1999.

Christianity is the largest religion in Arunachal Pradesh followed by Hinduism. According to the census of 2011, Christians constituted 30.26 percent of the state’s population. The Catholic Church is the largest Christian denomination in the state with around 180,000 adherents.