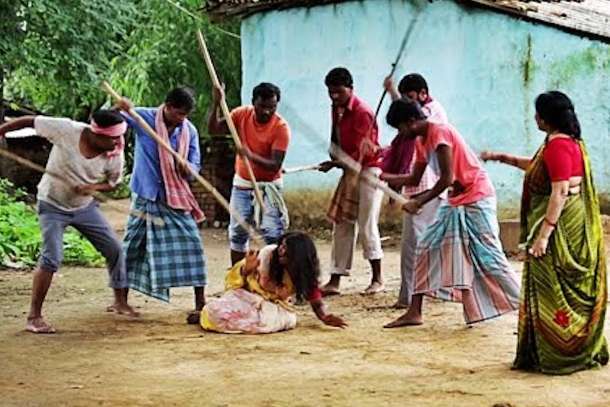 India’s tribal-dominated Jharkhand, Odisha, Chattisgarh and Telangana states are the worst for persecution of those accused of witchcraft. (Photo: YouTube drama)

Police in the eastern Indian state of Jharkhand have arrested three people for killing three members of one family for alleged witchcraft in a crime described as an “inhuman act” by a Catholic official.

The bodies of Birsa Munda, 48, his wife Sukru Purty, 43, and daughter Somwari Purty, 20, of Kuda village in Khunti district, were found by police on Oct. 28 after they went missing on Oct. 7.

“It is an inhuman act and we condemn it because we have no right to take away anybody’s life. It is a matter of concern and civil society has to take it very seriously as it can’t be acceptable in modern times. The Church is always pro-life and these kinds of incidents sadden us,” said Father Vincent Ekka, who heads the department of tribal studies at the Jesuit-run Indian Social Institute in New Delhi.

“When the whole country is talking about development and progress, killing in the name of witchcraft is certainly a setback to all of us. We have to address it collectively because it needs the involvement of government machinery, non-government organizations, civil society and missionaries.”

The Oraon tribal priest said rural areas have more cases of witchcraft practices, mainly caused by illiteracy and lack of awareness in villages.

Ashutosh Shekhar, the police superintendent investigating the case, said the beheaded bodies of the three victims were recovered in a forested area near their village.

“We have arrested three people out of nine suspects and are on the hunt for the remaining six. The three suspects have admitted their crime,” Shekhar told the Hindustan Times.

He said the disappearance of the family came to light on Oct. 12 when the couple’s daughter Telani, who is married and stays in another village, lodged a complaint with police about her missing parents and younger sister.

In her complaint to police, Telani raised suspicions about a few villagers who allegedly abducted the trio due to a land dispute.

According to a media report, a newborn child had died earlier this month in the village, following which the child’s family members were told that the death was due to witchcraft practiced by the Munda family.

Soon after this, the report states, the trio went missing.

Incidents of torture and murders of women branded as witches are still reported, particularly from poor and rural regions where superstitious beliefs are common. Tribal-dominated Jharkhand, Odisha, Chattisgarh and Telangana are the worst-affected states.

Ratan Tirkey, a member of the tribes advisory committee of Jharkhand’s government, told UCA News that witchcraft practice represents the total failure of the state government to provide education for villagers.

“Lack of knowledge also keeps people in confusion about whether to believe in witchcraft practices.”