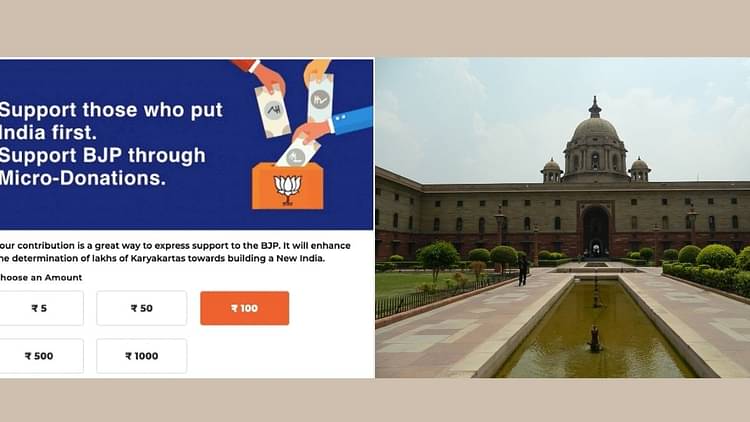 The revelation in the investigation carried out by The Quint that the Prime Minister’s Office (PMO) has sent emails in a roundabout manner requesting the users of the PMO’s official ID Sampark.gov.in for contribution to BJP funds, may seem highly unethical and violating all norms of separating government from the ruling Party, but for the BJP leadership, this sort of using official agencies for party purposes has become most natural in the last six years of Prime Minister Narendra Modi’s rule.

Sampark.gov.in is the official PR ID used for sending mails from the Prime Minister’s Office. It has been found that at least one lot of emails generated by the PMO’s sampark.gov.in ID has allegedly been used to collect funds for the BJP. Use of government machinery to collect funds for a political party is a clear violation of the Election Commission’s Model Code of Conduct.

On 21 October 2020, the Prime Minister’s Office is alleged to have sent an email blast through ‘no-reply@sampark.gov.in.’ with the subject

“Rajmata was a decisive leader & skilled administrator, says PM; People in rural India get ownership rights of their homes…More in the newsletter!” When it was clicked, it was found that at the end of all seven articles in the newsletter, there was an advertisement saying “Support those who put India first. Support BJP through micro-donations.”

Further, this very ad led to another page, as per The Quint, saying “Your contribution is a great way to express support to the BJP. It will enhance the determination of lakhs of karyakartas towards building a new India”. And below this, there were options for donations ranging from Rs 5 to Rs. 1,000.

So now, the PMO has been turned into a centre for open collection of funds for the BJP. There is nothing unusual about the ruling party ministers collecting funds for their respective parties. All the parties do that in unofficial manners and that has been a part of the Indian political system for long. But till now, no PMO portal was used so brazenly for collecting funds for the ruling party. If this continues, if there is need for BJP to collect funds from its new swanky party office building at Deendayal Upadhayay Marg, it can be done much faster by making use of PMO under Narendra Modi.

The BJP has emerged as the big daddy of the Indian large corporates and the party is taking maximum advantage of the anonymous character of the donors to the recently introduced electoral bonds scheme by cornering more than 90 per cent of the total funds. The trends of the collections of BJP from the electoral bonds and the different trusts run by the large corporates indicate that by March 31, 2029, the BJP was multiple times cash rich compared to the grand old Congress Party and its financial muscle during the Lok Sabha elections in April/May 2019 helped the party in a big way in cornering opposition candidates.

In 2017-18, the first year of the introduction of electoral bonds, the official figures state that Rs 222 crore were raised from the contributors and out of that, Rs. 210 crore was received by BJP, bagging 94.5 per cent of the total. The Congress figures are not known but it will be less than Rs. 10 crore since only Rs. 12 crore is left after BJP has taken away Rs. 210 crore out of the total of Rs. 222 crore collected during 2017-18. Thus, the position of the Congress party is pathetic in terms of contribution from the donors, mostly belonging to the industry and the businessmen.

Congress President Rahul Gandhi’s continuing tirade against the industrialists starting with Anil Ambani must have antagonised the industry people, especially the crony capitalists who are getting a feeling that the young Congress leader might opt for a centre-left economic policy delinking to a great extent from the neo liberal line of the earlier UPA era.

That the BJP is a darling of the Indian corporate is also clear from the funds obtained by the party from the Prudent Electoral Trust which gave BJP Rs. 144 crore out of the total of Rs. 169 crore donated in 2017-18. In the next two fiscals this amount went up further and the BJP is now so flush with funds that the party can buy any vulnerable Opposition legislator. This happened in Madhya Pradesh last year and is happening in other states where the Congress is in power. Only in Left ruled Kerala and in Trinamool ruled West Bengal, the BJP could not make much breakthrough in terms of bribing opposition legislators.

The BJP was initially a party of the traders and till the late eighties, the BJP’s coffers were not substantial as only a few corporates took interest in the BJP then and the Congress was the darling of the Indian business houses since the beginning of independence. Though the first Prime Minister Jawaharlal Nehru did not like hobnobbing with the Indian industrialists, the Congress Party’s treasurer always depended on the Indian big houses for donations. The Birlas were closest to the Congress party and they adopted a large number of the Congress MPs and took care of their election expenses. Other prominent industry people also gave substantial donations to the Congress.

This situation started changing after 1977 when the Jan Sangh became a part of the Janata Government and the saffronites interacted with the industry people as a part of the government. After the BJP was formed, the party leadership gave special focus on cultivating the industry people apart from their traditional traders base. A strong industry lobby was formed by BJP and initially this lobby belonged to those who were adversely affected by foreign competition. Later many middle level industry people became BJP supporters.

The situation further favoured BJP after 1989 and in the next ten years, the BJP started collecting huge funds from the industry, traders and the overseas friends of the BJP The situation was consolidated by the BJP during 1999-2004 period of Vajpayee’s rule and the BJP became much more resourceful than the Congress in terms of funds. During the ten years of the Congress-led UPA rule from 2004 to May 2014, the resources of the BJP in terms of fund raising only got strengthened as there was a huge expansion of the overseas base of the BJP in view of the spread of Hindu nationalism amongst a good section of the NRIs. The BJP resource base expanded most in the USA as Prime Minister Narendra Modi was liked by the rich Gujarati entrepreneurs based in US and they liberally contributed to the BJP fund. Funds also came through the branches of VHP in foreign countries and the Hindu temples controlled by them.