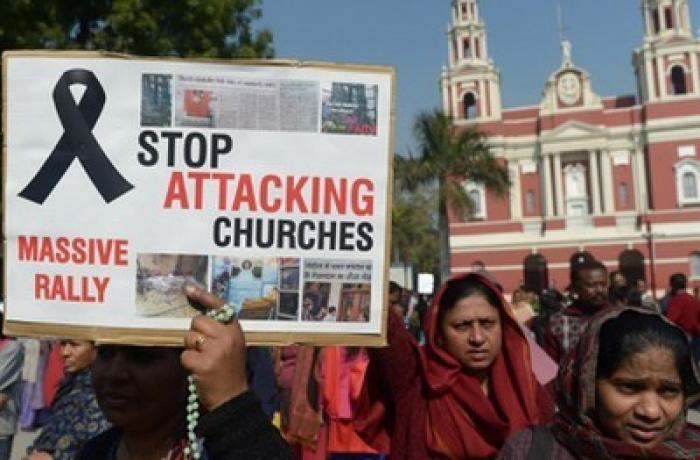 The anti-conversion law “has become an instrument in the hands of radical Hindu groups to harass Christian communities”. The Church of Bophal denounces the violent violation of private property. Fr. Babu Joseph, former spokesman for the Indian bishops: “Hindu fundamentalists, capable only of creating chaos”. “We Christians offer education, medical care, social apostolate, development for the poor, the marginalized, Dalits, tribals, women and children … Why are these people targeting us?”.

Indore (AsiaNews) – A crowd of Hindutva members attacked the prayer meeting of a Pentecostal community in the Satprakashan Sanchar Kendra Center (Center for the light of truth) for allegedly illegal conversions.

Fr. Babu Joseph, SVD, and the bishop of the diocese of Bophal, Msgr. Leo Cornelius denounced the violent action for violation of private property. But above all – they say – “it is time to ask ourselves what value and usefulness” the anti-conversion laws have in society and this type of reaction of Hindu fundamentalists, capable only of “creating chaos”.

Yesterday, Indian Republic Day, a group of 90 Pentecostals were holding a prayer meeting in the downtown lobby. In a nearby school, a meeting was being held between Hindu groups. Some of these, hearing the songs and prayers, approached the building. A crowd immediately gathered and entered the centre shouting anti-Christian slogans and denouncing conversion activities.

Madhya Pradesh is one of the Indian states with a law against forced conversions. Fundamentalist Hindu groups want to spread the Hindutva culture everywhere, claiming it as the only truly Indian culture. Other cultures and religions are considered foreign and they want them erased from the country.

Archbishop Leo Cornelius explains to AsiaNews: “These allegations of conversions are false. The center is private property, it is neither a school nor a public institution. This is why we have warned the police to proceed according to the law: to check whether there were any conversion activities, but also to verify with what right a crowd of strangers can enter private property”.

Father Babu Joseph, the director of the centre, was on vacation that day. He was the spokesperson for the Indian Bishops’ Conference. On hearing the news, he returned to the place, where the police had already arrived. He noted that the crowd did not cause much damage: only some photos hanging on the walls, which were destroyed. In any case, the centre was busy with crowds until 6pm.

He tells AsiaNews: “For some fanatical organizations, entering the private property of others has unfortunately become a habit and the excuse is always to prevent forced religious conversions. It is a growing phenomenon and this is a clear sign that these groups have the tacit support of Hindutva majority forces. But it is now time to ask ourselves what value and usefulness these people have in society. The only contribution they make is to produce social chaos and disaffection, something our country really doesn’t need today. The government should guarantee every citizen to live with dignity and freedom”.

The bishop is even more direct: “These people use the law as they want and this is bad for democracy. These ‘pseudo-nationalists’ shout slogans and propaganda causing damage to law and order. We Christians are a tiny minority, but we contribute a high percentage to the development of the nation. We offer education, medical care, social apostolate, development for the poor, the marginalized, Dalits, tribals, women and children… Why are these people targeting us? ”.

Maria Stephen, spokesman for the Archdiocese of Bophal, concludes: “After the passing of the law against forced conversions, many incidents occur in Madhya Pradesh. That law has become a tool in the hands of radical Hindu groups to harass Christian communities. And if we file a police report, they file a counter-report. So, ironically, innocent Christians, from victims, become the aggressors”.

“Their plan is to defame the Church and its institutions” says Fr. Babu Joseph. “But we will not be victims of their nefarious plans. We continue our work for the development of all, because India is our beloved homeland and we are all its citizens “.