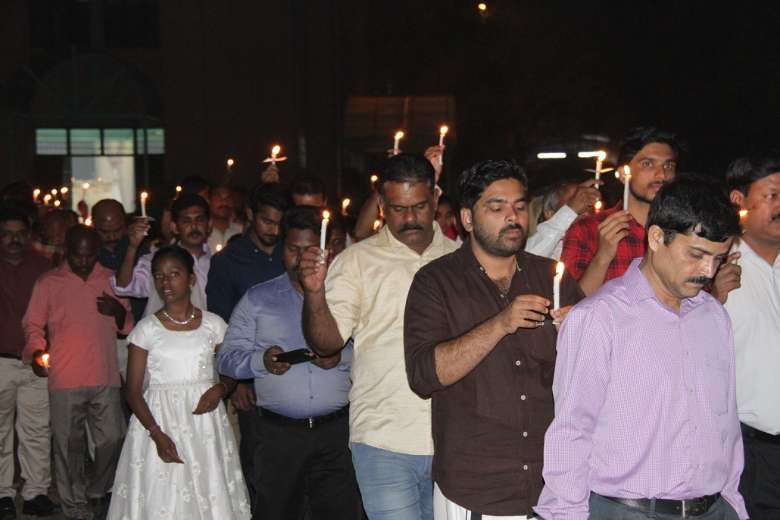 Catholics from the Syro-Malabar-Church, one of the three rites that comprise the Indian Catholic Church, observe Lent at St. Mary’s School in East Delhi in April 2018. (Photo: Bijay Kumar Minj/UCA News)

Police in the southern Indian state of Telangana have arrested two Bharatiya Janata Party (BJP) workers for assaulting a pastor accused of carrying out religious conversions.

Pastor Chandra Mouli of the Jerusalem Church in Hasthinapuram, Vanasthalipuram, was attacked when he visited the house of church member Jayamma on Jan. 28, police official K. Murali Mohan said.

One of Jayamma’s family members was sick, so the pastor had gone there to lead prayers.

“Lately we have been witnessing regular attacks against Christians in the state, which is very dangerous for a secular society like India. We have to address this issue or else we may face big problems in the future,” Pastor Samuel of Jesus Christ of Nazareth Ministries told UCA News.

“We have to be careful about fanatic groups who are trying to create hatred among different faiths by dividing people in the name of caste, creed and religion and trying to push their propaganda.

“Let’s wait for the investigation. We have full faith in the administration and hope the after the investigation peace may prevail among all communities. The confusion over religious conversion must be cleared up.”

An argument broke out and the two BJP workers attacked the pastor and injured him. Meanwhile, Jayamma’s family reported the incident to police, who rushed to the spot and rescued him.

Mouli filed a complaint on Jan. 29 and the case was registered. That day hundreds of BJP members protested in front of the police station alleging the police were favoring the pastor.

Police said that the arrested were part of a group called Hindu Dharma Protectors.