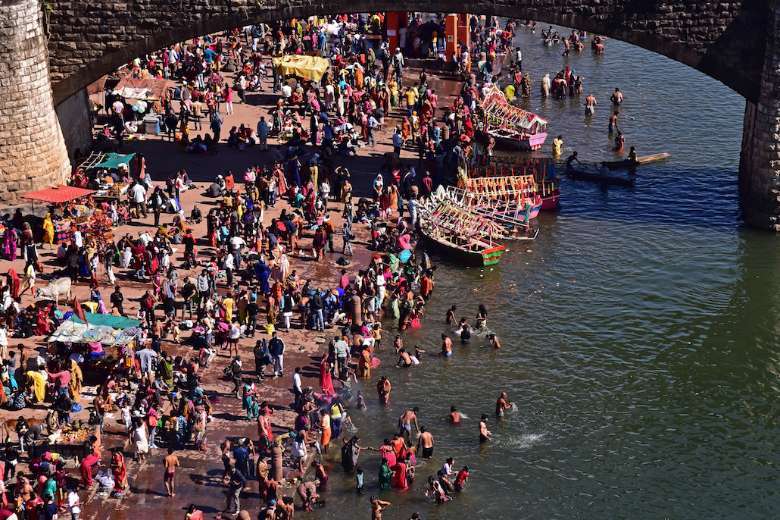 Hindu devotees take a holy dip in the Narmada River on Makar Sankranti, a day considered to be of great religious significance in Hindu mythology, at Tilwara Ghat in Jabalpur in Madhya Pradesh on Jan. 14. (Photo: AFP)

A right-wing Hindu group has demanded an immediate shutdown of all churches built in tribal areas of the central Indian state of Madhya Pradesh and action against Christian priests and pastors involved in alleged religious conversion.

However, church leaders denied the conversion allegations and termed the demands an attempt to terrorize and defame them by taking advantage of the newly enacted anti-conversion law in the state.

“All the illegally built churches should be shut down immediately, and action should be taken against all priests and pastors involved in the process,” said Singh, who is based in the state’s Jhabua district.

Along with his hundreds of supporters, including some indigenous people, he marched through Jhabua city on Jan. 11 and handed over a memorandum detailing their demands to the district collector, the highest government officer in Jhabua.

It accused indigenous pastors and priests, including some from the Catholic Church, of illegal conversions of tribal people.

The government should record the conversion activities of priests and pastors and block all social welfare benefits meant for indigenous people, which the converted Christians continue to enjoy, Singh told media after submitting the memorandum.

“As per the special provisions of the Indian constitution, the traditions, cultures, languages and other practices of the indigenous people are bound to be protected and nobody from outside is allowed to change them,” he said.

Based on the constitutional guarantee to protect tribal culture, “there is no scope for building churches in tribal areas. The functioning Christian churches should be stopped immediately.”

The Hindu leader issued a 30-day ultimatum to the government and threatened to initiate violence to stop the church activities.