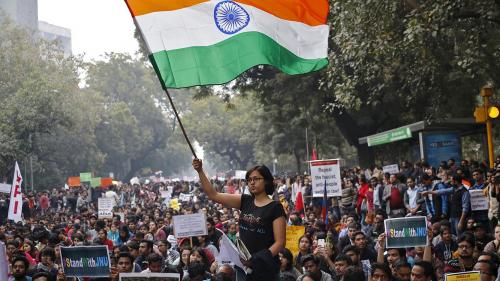 Bhubaneswar: We observe Minority Rights on December 18. It is time we critically examined how India empowers and protects the rights of minorities.

There is no internationally agreed definition as to which groups constitute minorities. Francesco Capotorti, Special Rapporteur of the United Nations Sub-Commission on Prevention of Discrimination and Protection of Minorities, in 1977 defined a minority community as a group numerically inferior to the rest of the population of a country.

They could possess ethnic, religious or linguistic characteristics differing from the rest of the population. They could also show a sense of solidarity to preserve their culture, traditions, religion or language.

In 1992, the United Nations adopted this definition based on national or ethnic, cultural, religious identity. The international body expects the States to protect the minority communities.

Except Hindus, the rest communities have been identified as minority communities.

The government of India established National Minorities Commission in 1978 because, ‘”despite the safeguards provided in the Constitution and the laws in force, there persists among the Minorities a feeling of inequality and discrimination.”

Why the Minority Day?

The United Nations Minorities Declaration in 1992 set December 18 as the annual Minorities Day 1992. The Indian government further established the Ministry of Minority Affairs in 2006. As citizens, the religious minority members are entitled to the fundamental rights of the Indian constitution. The Article 25 of the Constitution gives citizens the freedom to of conscience and right to freely profess, practice and propagate religion.

Moreover, the religious minorities have special and separate provisions in the Constitution under the Articles 29 and 30. Article 29 provides the right to conserve its ‘distinct language, script or culture’ and Article 30 gives the right to establish and administer educational institutions of their choice

This controversial Presidential Order is considered the biggest contributor to the violation of religious minority rights in India. It is a huge deterrent on the citizens of Dalit origins to choose Christianity and Islam religions.

Article 341 (1) of the Constitution empowers the President of India to specify, through a public notification, the castes, races or tribes or parts of or groups within castes, races or tribes which be deemed to be Scheduled Castes in relation to that State or Union Territory. This led to the enactment of the Constitution (Scheduled Castes) Order, 1950, referred to as the Presidential Order, 1950. The important provision of the order was, “No person who professes a religion different from the Hindu the Sikh or the Buddhist religion shall be deemed to be a member of a Scheduled Caste.’

The Presidential Order (Scheduled Casts) 1950 (3) deprives the Christians and Muslims of Dalit origin the constitutional provisions for equality as as given in Articles of 14, 15, 16, 25, 26, 27 and 28. This has been reiterated by Justice Ranganath Mishra Commission appointed by government in 2007.

The commission strongly recommended: “Para 3 of the Constitution (Scheduled Caste) Order 1950 – which originally restricted the Scheduled Caste net to Hindus and later opened it to Sikhs and Buddhists, thus still excluding from its purview the Muslims, Christians, Jains and Parsis, etc – should be wholly deleted by appropriate action so as to completely delink the Scheduled Caste status from religion and make the Scheduled Castes net fully religion-neutral like that of the Scheduled Tribes.”

Any offer of solidarity or distribution of medicine by the missionaries or NGO workers could be construed as inducement and allurement. The possibility of better health facilities, free or subsidized education in an English medium school for the children could also fall within the ambit of these terms. Under these laws, ‘force’ could include ‘show of force or threat of injury or threat of divine displeasure or social excommunication.

The law presumes the Scheduled Caste and Scheduled Tribes communities are gullible and vulnerable. In fact, it does not trust their right to freedom of conscience and treat as adult citizens in the matter of religious freedom. The new convert has to get the approval of the district administration of the state to change the religion of one’s choice.

In Uttarakhand, the anti-conversion law empowers the parents and siblings of the converted individual with the right to go and complain to the district magistrate if they feel a conversion is taking place without following due process.

The Ordinance gives the State to decide on love, marriage and faith. It is not the person who wishes to convert before marriage; but the magistrate to decide upon the application of the would-be convert change of religion is legal or not.

If the magistrate decides that the conversion is unlawful, then the offence becomes non-cognizable and non-bailable, condemning the offender to arrest without warrant and years in prison. If the potential convert is a minor, or from the SC/ST communities, then the sentence is significantly enhanced.

The right to worship and adore God in a form of one’s own choosing ceases to exist. The state regulates religious choice. If a person wants to convert in order to marry outside her community, then it will not be her words or consent that will matter but those of her parents. The real beauty of the ordinance lies in the way it entirely exonerates Hindus from all charges of fraud, allurement or intimidation when they convert people from another community.

This is regressive anti-minority, SCST and misogynistic law. It presupposes the SCST and women of majority community to be gullible and infantile possible failing to exercise their right to freedom of conscience when it comes to the decision of marriage. The law has puts the innocent people into bar and tends to criminalize every interfaith marriage. This would further isolate the religious minorities in India from mainstreaming India’s syncretic & composite ethos and traditions.

Present situations: Increase attacks of violence on the Minority

Global Peace Report 2016 ranks India among 20 most violent places in the world to live in; even less peaceful country than Burundi. India is the fourth worst in the world in safety women according, to Thomson Reuters Report. India is fourth worst country in the World for Religious Hostilities among 198 according to Pew Research Study Report in April 2015.

‘There are reported cases of 122 violence against Christians; of which only 23 FIRs registered until June this year 2020. The latest incident involving murder of a young Christian boy named Somaru Madkami in Odisha two instances of physical assaults, threats and intimidation by family members and villagers alike and social ostracism.

According to the World Watch List of 50 countries, India is the 10th most dangerous country in the world to live in for Christians as against 28th in the year 2014’, reports by Alliance Defending Freedom (ADF) – India.

It is not Christian minority, but other vulnerable groups bear the brunt of hate crimes. “Amnesty International India documented 721 such incidents between 2015 and 2018. In 2018 year, itself, it tracked 218 hate crimes, 142 of which were against Dalits, 50 against Muslims, 40 against women, and 8 each against Christians, Adivasi and transgenders.”

NDTV’s study showed that there has been a 500 percent increase in the last four years in the use of hateful and divisive language by high-ranking politicians. In this, 90 percent of the hateful comments were attributed members of the ruling National Democratic Alliance (NDA). No one was prosecuted.