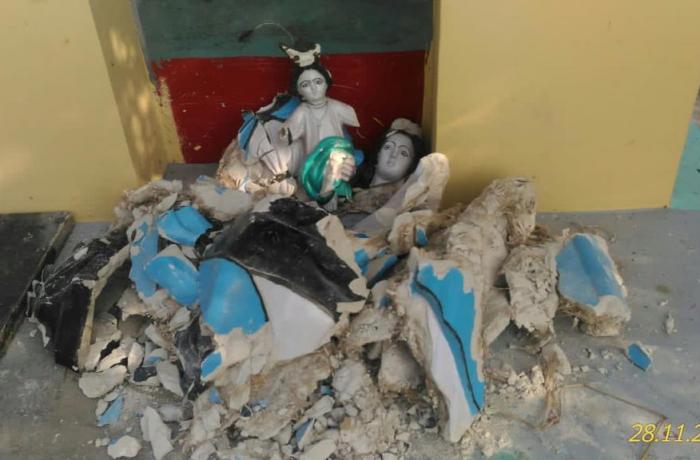 Two plaster statues of the Virgin were smashed whilst the concrete statue of Mother Teresa was damaged. Police and the Minorities minister expressed solidarity. For Bishop Shyamal Bose: “This attack is puzzling. People of different faiths keep statues of Mother Teresa in their homes. Many NGOs and non-Christian clubs are named after Mother Teresa.” She is “an inspiration for her commitment to serve the poor”.

Two weeks after two statues of the Virgin Mary were smashed to bits and a statue of Saint Mother Teresa of Calcutta damaged at the Sacred Heart parish church in Morapai (diocese of Baruipur), local Catholics are still wondering why no one has been arrested in connection with these acts of vandalism.

The statues were in two grottoes outside the church on parish land next to the road. “Two of the statues were removed from the grottoes and smashed into pieces since they were made of plaster,” said bishop Shyamal Bose, speaking to AsiaNews. “The other statue, that of Mother Teresa, is made of concrete and the vandals were unable to destroy it; they damaged and defaced it.”

“The day after the accident I visited the place and everyone present expressed regrets and showed solidarity. I asked our people to keep calm and peace “(picture 2).

Local authorities promised to arrest the perpetrators and replace the statues at their expense. A local lawmaker, Gisasuddin Molla, promised to install powerful night lights around the church.

For the bishop, “This attack is puzzling. People of different faiths keep statues of Mother Teresa in their homes. Many NGOs and non-Christian clubs are named after Mother Teresa”.

The Saint of Calcutta (Kolkata) is “an inspiration for her commitment to serve the poor, distributing food and clothing, giving charity. Some people celebrate their birthday or wedding anniversary by offering a meal to the poor in the name of Mother Teresa.”

“In my diocese, the Missionaries of Charity have four convents and are loved and respected. We serve the poorest of the poor, the marginalised, the homeless in the most remote areas of the diocese. People visit them, give them food, clothes, etc.

“People of all religious confessions receive love and help from them. After some natural disaster, the nuns distribute cooked food, gift packs, dry rations, provisions for the house. This is why the attack on those statues is truly puzzling. However, we are puzzle that after two weeks there has been no arrest.”

“Police officials from four neighbouring police stations visited the place, even the Minority Minister visited,” said Fr Kanauj Roy, vicar general of the diocese. “All the statues have been replaced by the government, paid by them.”